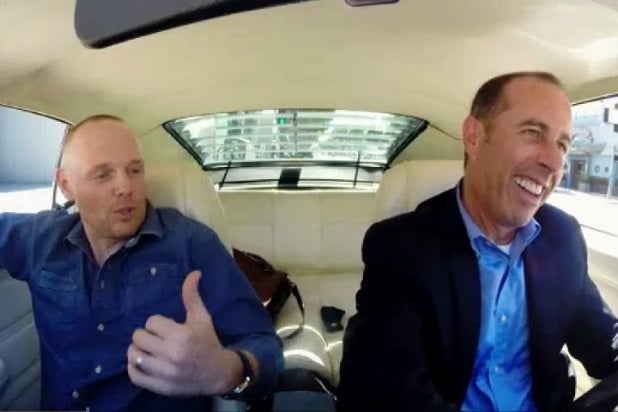 Finally, Bill Burr has weighed in on the debate over domestic violence in the NFL.

“Breaking Bad” alum Burr serves as the guest on the third episode of the current fifth season of Jerry Seinfeld‘s Crackle series “Comedians in Cars Getting Coffee.” In the episode, the pair of funnymen cruise around in a sweet Ford Mustang, suck down some suds and puff on stogies while discussing a wide range of topics.

Such as the domestic-abuse scandal that has plagued the NFL in recent months.

As Burr sees it, the NFL likely doesn’t have a bigger problem with domestic abuse than other segments of society. And don’t get him started on whether the highly publicized domestic-abuse cases involving NFL players influence the population at large.

“Whether I’m going to hit a woman or not in life was never informed by a running back for the Baltimore Ravens,” Burr opines in the episode.

Burr also offers his thoughts on what it’s like to appear in movies (“It’s like going to the DMV with famous people; you’re just sitting there, just waiting [and thinking], when are they going to call you?”); the city of Boston (“It’s like a racist San Francisco”); and the sad state of modern car design (“Once they rounded the headlights, it was over. Once they turned it into a bubble, everything looks the same”).

Burr also attempts to kill a fly toward the end of the segment, with little success. Hopefully the violent footage won’t be picked up and turned into a scandal by TMZ.

From Crackle: Smoking Past The Band