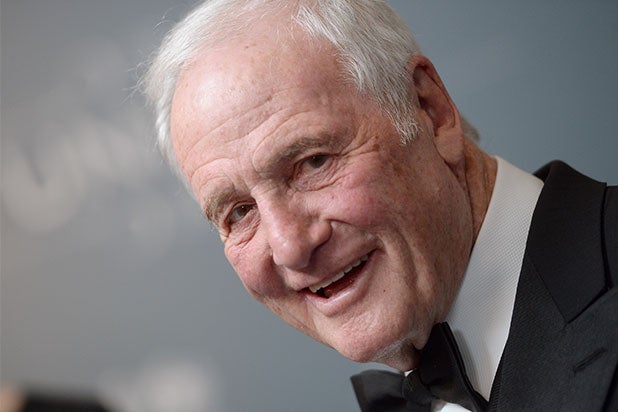 Jerry Weintraub, the legendary Hollywood producer and Emmy award winner, died in Santa Barbara of heart failure on Monday, an individual with knowledge of the situation told TheWrap. He was 77.

Weintraub’s 2014 climate change documentary “Years of Living Dangerously” netted him the Emmy for Outstanding Documentary or Nonfiction Series. The year prior he took home Outstanding Miniseries or Movie for “Behind The Candelabra.”

Before getting into the movie business, Weintraub had a successful career in music. He was the personal manager of John Denver, and also managed or promoted several heavyweight acts including Frank Sinatra, Led Zeppelin, Elvis Presley, Neil Diamond and the Carpenters.

In 2010, Weintraub teamed with author Rich Cohen to write his memoirs, called “When I Stop Talking, You’ll Know I’m Dead: Useful Stories from a Persuasive Man.” He was profiled in an HBO documentary called “His Way” in 2011.

In March of this year, he contributed a “My Perfect Day” column to Vanity Fair, which had “ribs and lunch with my golden retriever” in the headline. But in it, he said his days were really made by meetings with friends and people he’d worked with including “Steve Roth, Sly Stallone, George Clooney, Brad Pitt, Matt Damon, Bruce Willis, George Schlatter and Don Cheadle.”

Weintraub’s first gig in Hollywood was as talent agent at Lew Wasserman’s MCA, which he left to form his own personal management firm. There he co-founded the vocal group The Doodletown Pipers and managed acts like Joey Bishop, the Four Seasons and singer Jane Morgan, who later became his wife.

The following year, Weintraub founded the Weintraub Entertainment Group to produce movies and TV shows with funding from Columbia Pictures, Odeon, Coca-Cola and the American Tobacco Co. He landed a $145 million credit line from Bank of America and signed a 20-year deal with Columbia, which called for the mini-major studio to produce seven films a year.

A famously proficient negotiator, Weintraub put together numerous financing deals for WEG, but they became so intertwined and overlapping they eventually caused trouble.

An $85 million deal for the Thorn-EMI Entertainment Library prompted Bank of America to pull out of its loan deal with WEG. BofA came back with partner Credit Lyonnais to fund the company a year later, but Columbia sold its share of WEG after hiring Peter Guber and Jon Peters away from Warner Bros. A year later, WEG filed for bankruptcy, and Weintraub signed on to a production deal at Warner Bros.

Jewish and an inveterate cigar smoker, Weintraub also was that rare political breed: a conservative in show business. A self-described “George Bush Republican,” Weintraub was a major contributor to right-leaning causes and politicians, though he supported the presidential campaign of Barack Obama. “I want him to succeed. But I’m a little worried,” he told The Daily Beast.