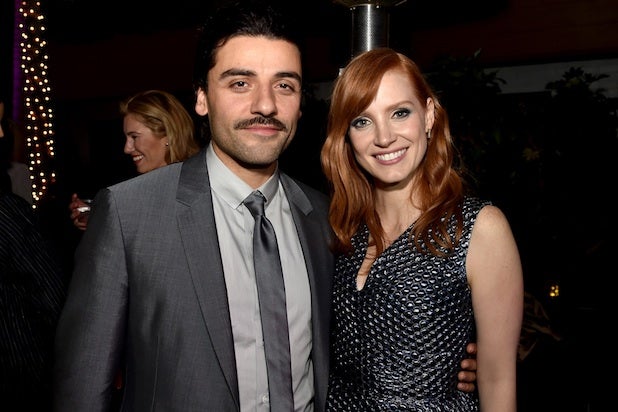 J.C. Chandor’s gangster drama “A Most Violent Year” had its world premiere at the opening night of AFI Fest 2014 on Thursday — and along with the largely positive buzz about the film itself, premiere guests couldn’t help but talk about how rare co-star Jessica Chastain‘s appearance could be.

The screening, after all, took place hours after the New York Times published a story about how Chastain’s contract for “Interstellar” prohibited her from campaigning for any other film during November and December. The “Most Violent Year” premiere, the story said, would be one of the only appearances Chastain was allowed to make on behalf of that film.

Asked by TheWrap about the story at a reception that followed the screening, Chastain declined to discuss specifics. She did say that she had no real interest in Oscar campaigning — and she took exception with the whole idea of being forced to play favorites, without admitting that it was happening in this case.

“Even when I had all those movies out in 2011, people wanted me to choose,” she said of the breakthrough year in which she was in “The Help,” “Tree of Life,” “Take Shelter” and several other films. “Why? Don’t ask me to choose one of my movies over another. I will always support all my movies as much as I can.”

Also read: ‘A Most Violent Year’ Review: Jessica Chastain, Oscar Isaac Chase the American Dream, by Hook or by Crook

But when it comes to “A Most Violent Year,” how much can she do? While the companies and reps involved would not address the Times report, several people with knowledge of the situation privately said that Chastain was indeed being held to a particularly restrictive contract she signed to make “Interstellar.”

But with that film’s director, Christopher Nolan, coming across as the bad guy in the Times story, there was also widespread speculation that what everyone assumed was a carefully-planted leak could force team “Interstellar” to back down.

Certainly, the reception for “A Most Violent Year” suggested that Chastain and the film’s male lead, Oscar Isaac, could be in the awards mix. Even those who weren’t completely enamored of the dark film said that the two actors, who met at Julliard more than a decade ago, gave powerhouse performances.

Chastain would be a contender in the relatively slim Best Supporting Actress category, where her work in “Interstellar” is also in the running; Isaac would be a candidate in the brutally competitive Best Actor category, where he failed to land a nomination last year despite a terrific performance in “Inside Llewyn Davis.”

On Friday, Chandor and Isaac are scheduled to do selected interviews on behalf of the film, but Chastain is not. She will, however, be in attendance at Saturday’s Governors Awards, to which every film with its eyes on awards — including both “Interstellar” and “A Most Violent Year” — will send emissaries to mingle with the Academy.

“I wonder,” said Chastain with a laugh, “which table they’ll put me at.”