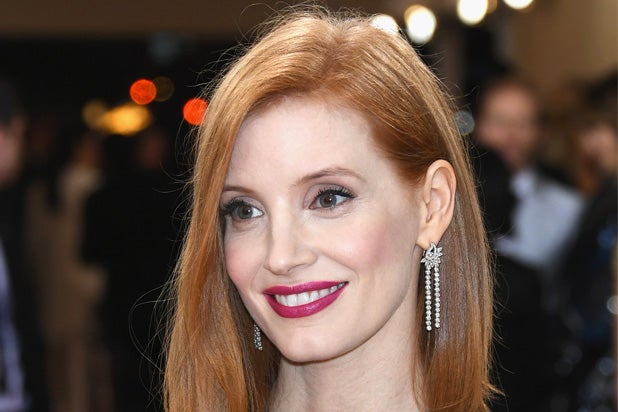 Jessica Chastain‘s just-announced new show about a group of women in the early 1960s who participated in a groundbreaking experiment modeled on NASA’s Mercury space program is being slammed as being “rip off” of the movie “Hidden Figures.”

“Thank god I cancelled Jessica Chastain after the faux feminism of MISS SLOANE so i dont have to deal with her HIDDEN FIGURES rip off,” tweeted one user.

“Oh wait it made MONEY? With BLACK women? Well get a load of THIS,” tweeted another.

The film has been a critical and commercial success. It has a “fresh” score of 92 percent on Rotten Tomatoes and is up for an Oscar in the Best Picture category. Financially, the film has made $122 million domestically.

Chastain’s new show has the working title “Mercury 13” and will tell the story of an experiment created in 1960 by scientist and physician William Randolph Lovelace II, to see if women could pass the same rigorous physical and mental tests faced by the men of NASA’s Mercury program. (Tests that Lovelace helped develop.) 13 women, dubbed decades later as “the Mercury 13,” advanced through the tests until the experiment was shut down by the U.S. Navy.

So while many slammed the show for being a copycat of “Hidden Figures,” some rushed to the show’s defense, saying it’s based on another true story.

Chastain’s rep has not yet responded to TheWrap’s request for comment. ITV Studios was not available to comment at the time of publication.

Seriously. Black people can't do shit in America without white people trying to steal it and capitalize off of it. Quit it, @jes_chastain.

When Black women do something extraordinary, someone always has to ask, "Well what about white women?" As if we forgot that they exist.

@MorganJerkins @JessicaValenti "Oh wait it made MONEY? With BLACK women? Well get a load of THIS"

@vulture Hmm.. will it be called "White Women Did Great Things Too"?? ???? It's too early for this level of beckery.