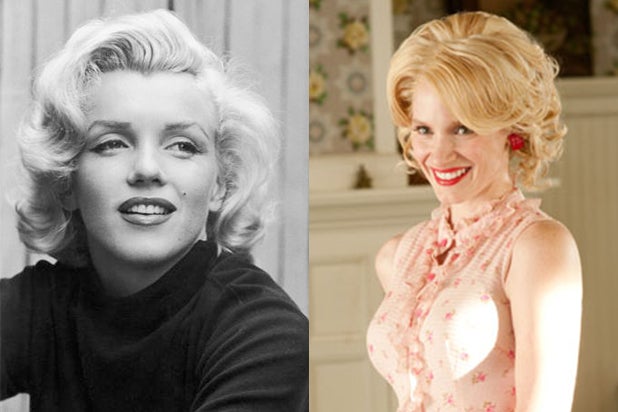 Representatives for Chastain and Worldview Entertainment did not immediately respond to requests for comment.

First announced in 2010, “Blonde” is based on Joyce Carol Oates’ 700-page novel of the same name, which reimagines the inner, poetic and spiritual life of Norma Jeane Baker — the child, the woman and the fated-celebrity better known by her studio name of Marilyn Monroe.

Oates drew on biographical and historical sources to paint an intimate portrait of Marilyn that reveals a fragile, gifted young woman who repeatedly remade her identity to overcome the odds and define stardom in the 1950s.

In 2001, Oates’ imagined memoir was a finalist for the Pulitzer Prize and the National Book Award, and the prolific author believes it may be the book for which she will be best remembered.

Dominik adapted “Blonde” on spec and his agency, CAA, will represent the film’s domestic distribution rights.

Worldview Entertainment optioned the long-gestating project in May 2013, and will produce the film with Brad Pitt and Dede Gardner‘s company Plan B — which according to the LA Times, boarded the project in June 2012.

Not only does Pitt have strong ties to Dominik, after starring in the director’s “The Assassination of Jesse James By the Coward Robert Ford” and his most recent film, “Killing Them Softly,” but he’s also close with Chastain. The actors shared the screen in “The Tree of Life,” and an individual familiar with “Blonde” told TheWrap that Pitt was instrumental in convincing her to tackle the challenging role of Marilyn Monroe, which comes loaded with expectations.

While Michelle Williams recently played Monroe in “My Week With Marilyn,” Chastain’s portrayal is expected to be much different, as “Blonde” will take an unconventional approach to examining the Hollywood starlet’s life and career.

“It’s a really sprawling, emotional nightmare fairy-tale type movie… about an abandoned orphan who gets lost in the woods,” Dominik told The Playlist at Cannes in 2012.

Naomi Watts had previously been attached to star but she hasn’t been involved with “Blonde” for some time. Chastain’s involvement has been rumored for some time, as Dominik let it slip that she was his choice to star in “Blonde” back in February at a revival screening of “Jesse James.”

While scheduling is still being worked out with another Chastain movie, “The Zookeeper’s Wife,” Dominik also revealed that production is expected to start in August.

“Blonde” was previously adapted in 2001 as a TV miniseries starring Poppy Montgomery.

Chastain, who is coming off the box office hit “Mama” and an Oscar nomination for “Zero Dark Thirty,” has three major movies on the horizon, as well as the indies “Eleanor Rigby” and “Miss Julie” with James McAvoy and Colin Farrell, respectively.

A natural redhead, Chastain dyed her hair blonde for “The Help” and walked away with an Oscar nomination. She’s repped by CAA, Mosaic and Hansen, Jacobson.