But after that response kicked up an online firestorm on Friday and charges of digital anti-Semitism, the tech giant quickly changed its algorithm to produce a less contentious search result.

Last year, the people at Google started toying with new ways to run searches, inserting a white box above the blue links where it put answers to more complicated questions.

A search for “Who runs Hollywood?” produced a befuddling answer box and link from a right-wing website denouncing the Anti-Defamation League, a prominent Jewish advocacy group. 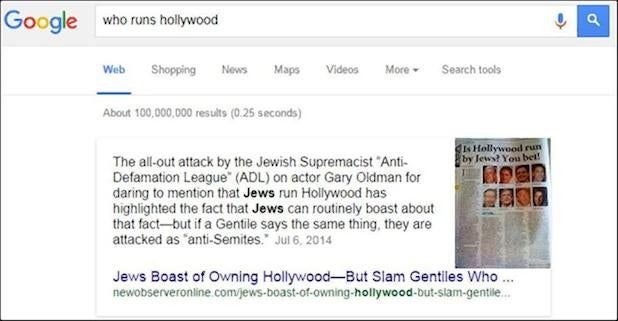 U.K’s The Guardian went with, “Who runs Hollywood? Google has an answer, but it’s not a good one.”

“We worked quickly to remove this answer,” a Google spokesperson told TheWrap. “We assure you that the views expressed by such sites are not in any way endorsed by Google.”

In June, Google ran into similar problems when a search for “what happened to the dinosaurs” prompted a response from a Creationist website. That response is still on the site.