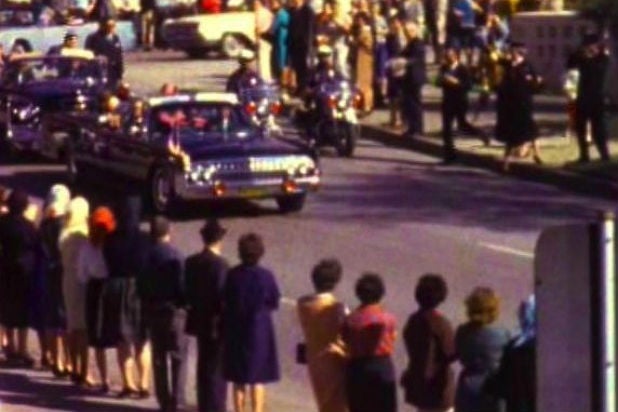 In a development that could shed new light on the assassination of President John F. Kennedy, a Hollywood movie producer is shopping new, long-hidden footage of JFK’s Dallas motorcade which the producer believes may support the theory that Lee Harvey Oswald didn’t act alone, TheWrap has learned.

Stephen Bowen is a successful Texas-based real estate developer who is a principal at Waterstone Entertainment, represented by the Gersh Agency. Bowen acquired the footage from a local Houston television news producer who has held it for more than 40 years, according to an individual involved in the deal. Bowen decided the 50th anniversary of JFK’s death was a good time to bring it to market.

See photos: 14 Conspiracy Movies That Came After the Assassination of JFK

TheWrap has not seen the footage. However, two individuals who have described portions of the tape that could challenge the lone-gunman theory ultimately supported by the Warren Commission.  “You can see a guy in the bushes with a gun,” said one of those individuals. “It looks like real footage, though I am not an expert.”

Two sources have told TheWrap that Gersh’s Jay Cohen has agreed to broker the deal. The producers have arranged private screenings of the footage for news networks and other interested parties next week in Los Angeles, including CNN, Fox News and Reuters. While it’s unclear exactly what the footage will depict, those familiar with Gersh’s sales pitch say that Bowen believes it may help prove John Kerry and Robert F. Kennedy Jr.‘s recent comments doubting that Lee Harvey Oswald acted alone in the assassination.

The majority of the American public’s exposure to the JFK assassination stems from the tape made by private citizen Abraham Zapruder, which Time Inc. purchased, though several frames were subsequently damaged. (Time later sold the film back to the Zapruder family.) Bowen’s footage is believed to be an amalgamation of footage assembled from that fateful day in Dallas, including undamaged, missing frames from the Zapruder tape.

Also read: How the JFK Assassination Kicked Off the Rise of Paranoid Thrillers

Waterstone is an independent film and television production company that Bowen founded with Jeff Kalligheri, a producer on the 1999 horror-comedy “Lake Placid” and the 2012 James Franco-Winona Ryder thriller “The Letter,” which never saw wide theatrical release. Waterstone has several film projects in the works including the Chris Pine comedy “Mantivities,” and has a partnership with Innovation Films in Qatar.