Carrey, who in recent years has taken a step back from Hollywood and focused more on his artwork, collaborated with animator (“Toy Story,” “Monsters Inc.,” “Finding Nemo”) and director (“Dr. Seuss’ Horton Heard a Who!,” “Free Birds”) Jimmy Hayward to take Carrey’s latest work of art and add a creative twist to it with music and movement.

“It’s based on my painting of a crazy old Lighthouse Keeper, standing naked in a storm, summoning the angels and shining his lamp to guide us through a treacherous night,” Carrey wrote in the blurb accompanying the video animation, which you can watch below. 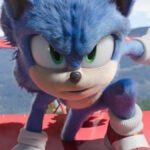 In February 2021, Carrey hung up the artist’s cap he had worn for four years and stepped away from his “political protest cartoons” that chronicled troubling events in the country. “Something tells me it’s time to rest my social media gavel and reclaim a little neurological bandwidth,” he said at the time. 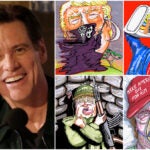