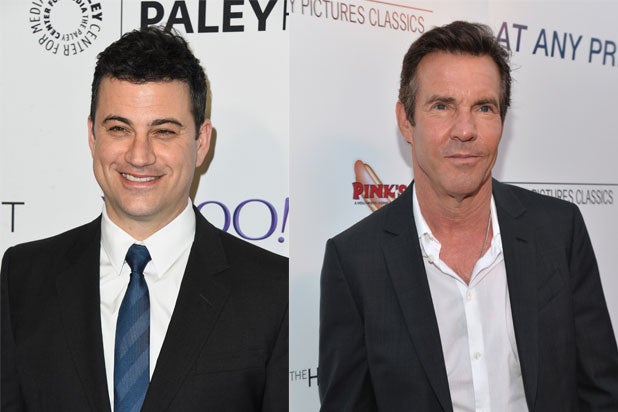 Jimmy Kimmel addressed the viral video of Dennis Quaid having a meltdown on a set following Internet speculation that it was a stunt for “Jimmy Kimmel Live!”

“I watched it a bunch of times last night — and when I woke up this morning — I was being blamed for it,” the ABC late-night host said on Tuesday’s show, in response to numerous reports that he had orchestrated the stunt.

As TheWrap previously reported, a 43-second YouTube clip, which appears to have been shot on a cellphone, captured Quaid verbally flipping out on “the most unprofessional set” he’s ever been on.

Also Read: Dennis Quaid Lashes Out on Set: ‘This Is Garbage, Blow Me’ (Video)

“What the fuck? Keep going. I am acting here, and this dickhead here wanders on my set. I can’t even get a line out, until Dopey the dick starts whispering in your ear and you’re not even watching anymore,” the actor screamed. “Don’t fucking ‘Dennis’ me. I am doing my job here. I am a pro. This is the most unprofessional set I have ever been on. This is horse shit!”

“So I watched the video last night, about 14 times.

“My favorite part was this ‘I can’t even get a line out with Dopey the Dick whispering in my ear.’ For the next eight years, I’m planning to call everyone Dopey the Dick.

“But anyway, I watched it a bunch of times last night — and when I woke up this morning — I was being blamed for it. There are two dozen articles — and thousands of comments online — suggesting that this is a prank — and I am responsible for it. And I have to say — that’s disappointing. You play like 50 pranks and all of a sudden people don’t trust you anymore.

“Did you ever consider that maybe Dennis was doing voiceover for a new cartoon? That’s right — he’s playing ‘Dennis Duck.’

“You know, I promised we’d get to the bottom of this Dennis Quaid video controversy. The truth is — the reason Dennis released that video — is to promote his new children’s book. ‘Dopey the Dick.’ I read it to my daughter last night. She loved it.”

There was growing suspicion on Tuesday that the incident was a hoax set up by Kimmel, similar to the “Worst Twerk Fail EVER — Girl Catches On Fire!” video that went viral in 2013 and was later revealed to be a skit for the show. The woman who caught fire was later identified as a stuntwoman.

Quaid, 61, is no stranger to on-camera high jinks, either, having pranked unsuspecting people several times during appearances on “The Ellen DeGeneres Show.”

The “Day After Tomorrow” star’s representatives declined to comment on the video. A representative for Mythology Entertainment — the production company behind his latest film project, “Truth” — told TheWrap that it did not take place on the set of their film, which wrapped production last year.

Quaid will also be appearing in a one-hour scripted drama for Crackle, which was announced Tuesday at the Sony-owned channel’s upfront presentation in New York, but that is not yet in production.

Watch video of Quaid’s meltdown below.