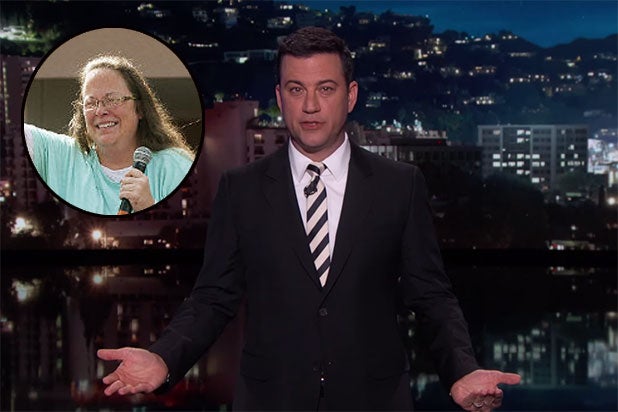 Controversial Kentucky clerk Kim Davis, who was held in contempt of court for refusing to issue same-sex marriage licenses, has caught America’s attention and already become the butt of late-night jokes.

“Kim Davis, that county clerk in Kentucky who went to jail because she refused to issue same-sex marriage licenses, got out of jail today. That’s right — she came out to the tune of ‘Eye of the Tiger,'” Jimmy Kimmel said during his opening monologue Tuesday.

“That’s the kind of intro you get before you fight The Undertaker at [WWE] Summerslam,” he joked. “I guess you were looking for a song no gay person has ever danced to and ‘Eye of the Tiger’ fit the bill.”

Also Read: Jimmy Kimmel Says Matt Damon Is 'Holed Up in a Bathroom' With Picture of Tom Brady

Davis was greeted by a cheering crowd when she emerged to the “Rocky III” song and plans to return to work in Rowan County, Kentucky, this week and won’t resign from her post, CNN reported.

“Mrs. Davis says she believes strongly in the sanctity of marriage. So much so, she’s been married four times — to three different men,” Kimmel continued, referring to her own personal past.

“Mike Huckabee and Ted Cruz were both on hand to offer their support. Plus, they heard there might be cameras there.”

Frankie Sullivan, Survivor frontman who got an Oscar nomination for the 1982 hit, isn’t a fan of either Huckabee or Davis exploiting the song.

“NO! We did not grant Kim Davis any rights to use “My Tune -The Eye Of The Tiger.” I would not grant her the rights to use Charmin!” he wrote on Facebook. “C’mom Mike, you are not The Donald but you can do better than that.”

As for Kimmel, he added: “I don’t understand what this woman’s point even is. If you don’t feel comfortable letting gay people get married, that’s OK — just quit. This was a Supreme Court decision. She’s a government worker. This is like refusing to issue drivers licenses because you’re Amish. ‘I’m sorry, but I believe in buggies, and buggies alone.'”