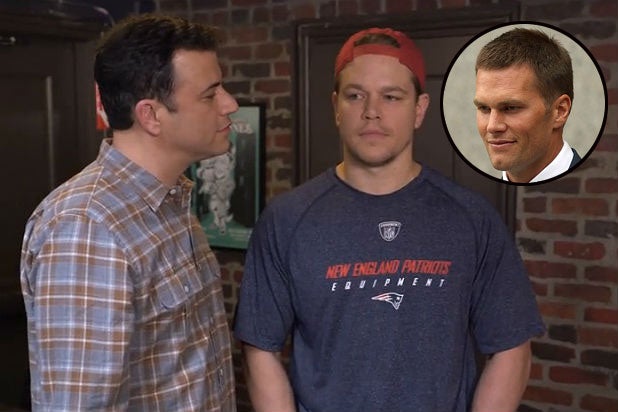 Millions of New England Patriots fans celebrated a federal judge’s ruling that Tom Brady‘s “Deflategate” suspension be overturned, but none more so than Matt Damon. According to Jimmy Kimmel, at least.

“The force was with Tom Brady and New England Patriots fans today,” the “Jimmy Kimmel Live!” host said of the decision in his opening monologue Thursday.

“I knew that was gonna happen, of course the suspension was overturned. I mean — is that the face of someone you can stay mad at?” he asked.

“Matt Damon is reportedly holed up in a bathroom right now with that picture in his lap,” he quipped, referring to the Boston-born actor’s diehard dedication to the Patriots.

The joke about the “Bourne Identity” actor’s school boy obsession with the Super Bowl champion quarterback comes after years of fake feuding between the pair, with Kimmel repeatedly ending his show by saying: “My apologies to Matt Damon; we ran out of time.”

Following the latest good news for New England fans, Kimmel retweeted the spoof as a Throwback Thursday post on Twitter for the Hollywood stars who had claimed “I am the locker room guy.”