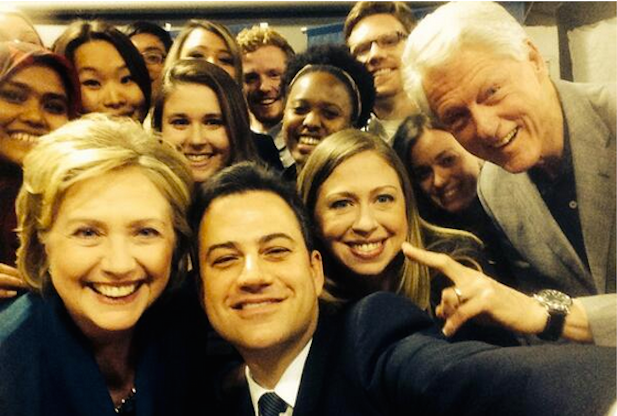 Maybe it didn’t have the Hollywood star power Ellen DeGeneres‘ record-breaking Oscars selfie, but the former (and potential future) leader of the free world isn’t bad company, either.

Jimmy Kimmel spent his Saturday evening at the Clinton Global Initiative University in Tempe, Arizona, interviewing the former first family of Bill, Hillary, and Chelsea Clinton, which isn’t a bad way to pass the time. After the conversation, he grabbed the three backstage (along with a few of the 1,000 students in attendance) to take a pic on his cell phone, which he then tweeted and added to Facebook.

One assumes he’ll also add it to his wall at the office.

Oh, and as for the interview, Kimmel mostly kept it light — the crowd learned that the Clintons really enjoy “Antiques Roadshow” on PBS — and that Hillary Clinton is still weighing her options when it comes to 2016.

“I am very much concerned about the direction of our country and it’s not just who runs for office but what they do when they get there and how we bring people together and particularly empower young people so we can tackle these hard decisions,” she said, more or less dodging the question (which came from a young audience member).