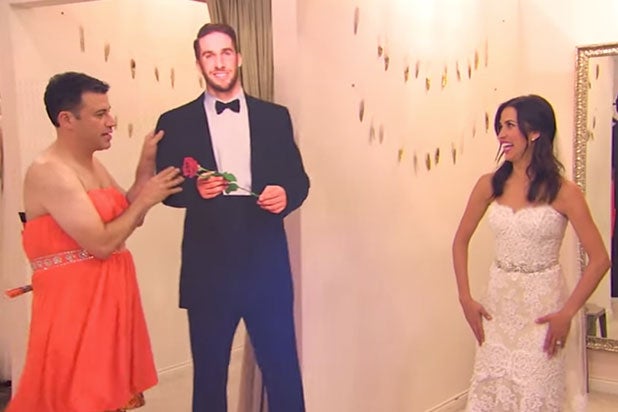 “Shawn proposed to Kaitlyn, Kaitlyn said yes, which means there’s like a 20 percent chance that they will get married,” Kimmel told his audience.

The trio went to “Lovely Bride” in West Hollywood, and Kaitlyn was pretty picky when it came to her dress: “Not poofy, lacy, sexy… but not too sexy.”

Rodriguez and Kimmel picked various dresses for Bristowe and watched her try them on while taking tequila shots. The Bachelorette tried on dresses ranging from a “hooker ballet” dress to a “tablecloth” looking dress.

After Rodriguez and Kimmel try on various (hideous) bridesmaids dresses, and Kimmel stretched out Bristowe’s leather leggings, Bristowe chose a classic, heart-shaped dress that made Rodriguez say, “yes to the dress.”

Also Read: 'The View' Addresses Slut-Shaming on 'The Bachelorette': 'When Did Twitter Become the Sex Cops?' (Video)

The dress had to pass one last test, however — Bristowe had to see how the dress looked next to Shawn Booth’s cutout. The runner-up, Nick Viall, also made an appearance as a cut out.