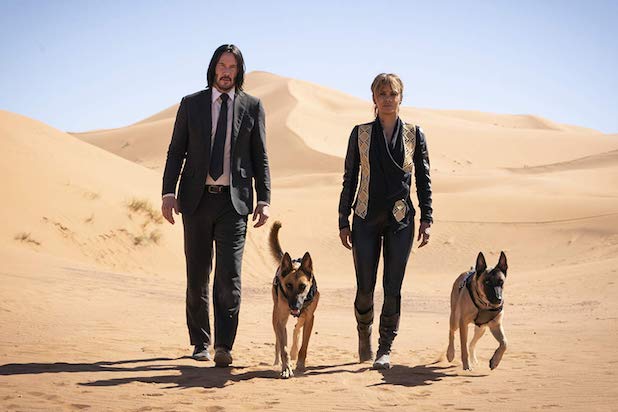 This weekend was a big one at the box office for Lionsgate, as “John Wick: Chapter 3 – Parabellum” earned $57 million from 3,850 screens — nearly doubling the $30 million opening of “John Wick: Chapter 2” in 2017, and giving the studio its biggest opening weekend since the “Hunger Games” series ended in November 2015.

At a time when many studios are acquiring recognizable franchises for four-quadrant appeal, “John Wick” was developed entirely in-house at Lionsgate with writer/creator Derek Kolstad and director Chad Stahelski growing from a cult favorite in 2014 to a potent R-rated summer action title.

Critics and audiences have praised the film’s signature fight sequences, giving “Chapter 3” an 88% score on Rotten Tomatoes and an A- on CinemaScore. Audience demographics were 63% male, with 45% over the age of 25.

As for “Avengers: Endgame,” falling to No. 2 on the box office charts this weekend didn’t bring an end to its record-smashing ways. In its fourth weekend, the film earned $29 million domestically to pass “Avatar” for the No. 2 spot on the all-time domestic box office charts. The James Cameron sci-fi film earned $760 million during its winter 2010 theatrical run, and “Endgame” has now passed that with $771 million. The one film standing in way of “Endgame” taking the  all-time domestic record is “Star Wars: The Force Awakens” with $936 million.

Globally, “Endgame” now has a box office total of $2.61 billion, with China contributing $624 million, while Korea and the U.K. have both passed the $100 million mark. The film is now approximately $170 million away from passing “Avatar” for the all-time global box office record.

Warner Bros./Legendary’s “Detective Pikachu” had a decent hold in its second weekend, earning $24 million for a 56% drop from its $54 million opening. It now has a 10-day total of $93 million.

In fourth is Universal/Amblin’s “A Dog’s Journey,” which is falling below expectations with an $8 million opening from 3,267 screens. That’s less than half the $18 million opening made by the family film’s 2017 predecessor, “A Dog’s Purpose.” Audiences who did see “Journey” were pleased, giving it an A on CinemaScore. Critics were more tepid with a 49% Rotten Tomatoes score.

Completing the top five is MGM’s “The Hustle,” which fell 53% from its $13 million opening to earn $6 million in its second weekend and a 10-day total of $23.1 million. Outside the top five is Warner Bros.’ “The Sun Is Also a Star,” which opened to a disappointing $2.5 million from 2,073 screens. The romance film earned a B- on CinemaScore and 50% on Rotten Tomatoes.