Jon Lovitz is a familiar presence on TV and in films such as “A League of Their Own,” “Rat Race” and the upcoming “Casino Jack” starring Kevin Spacey. His greatest acclaim came as a mid-’80s cast member of “Saturday Night Live,” where his characters Master Thespian and the Liar Tommy Flanagan made him a star — the biggest star in the galaxy (yeah, that’s the ticket). He recently opened the Jon Lovitz Comedy Club at Universal CityWalk, which this week hosted a benefit comedy show in support of the Wyland Foundation and environmental education.

Lovitz talked to Eric Estrin about his launch from the Groundlings, a chance tip from Jack Lemmon and one of Al Franken’s first important votes.

I started at the Groundlings when I was 25. I took classes for about a year, and I was in their Sunday company. Then I got in their main company. And then in January of ’85 we were doing a new show — and that’s when everything started happening for me. 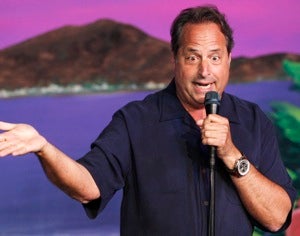 I remember on a Monday I started getting all these phone calls on my answering machine — congratulations, good for you, good luck, have fun — like about 20 messages, but nobody’s saying what it is. So I called up Tom Maxwell, our assistant director, and I go, Hey Tom, what’s going on? And he goes, we’re going to be on the “Tonight Show.” You’re gonna be doing your Liar character.

I was just completely blown away. Back when I was doing acting classes, all we would talk about was, well, when you get on the “Tonight Show,” what are you gonna say? That was like the symbol of making it, you know? So I couldn’t believe it.

I went to the rehearsal, and then we go into the makeup room, and there’s Morley Safer from “60 Minutes” doing a story on Jack Lemmon. So I’m like, Ooh, this is that world I heard about; this is where they all live. So Morley Safer says to Jack, Is there anything you’ve learned from acting all these years? And Jack Lemmon says, Yes, keep it simple.

So I thought, Okay, that’s what I’ll do. So I did that on the show, and it worked.

In the meantime, while all this was going on, someone I met through the clothing store where I worked in the Valley became an agent, and he signed me. And then a few weeks later he sent me on an audition and I got this movie with Charles Grodin called “Last Resort,” and like the same day I got “Foley Square,” Diane English’s first show.

Then I had to go back to Catalina Island to finish the movie. I came off the island on a Wednesday, and my agent was there, and he said, "They’re sending you to New York."

The "SNL" audition was in front of this huge rehearsal hall. I got there about 4:10, and I was supposed to be on camera at 4:30. And then I was waiting for like hours and hours, and I was nervous.

You have to understand, this was all over the newspapers … You know, Lorne was coming back, and they were looking at everybody in Canada and the U.S. It was like the finals of the Miss America contest. They had already cast Randy Quaid and Anthony Michael Hall and Terry Sweeney, and Robert Downey Jr., who was only 20 at the time.

In the hallway I was doing this bit about my grandmother for Randy Quaid. Randy was like 6’4” and Tim Stack — who I did the bit with in the Groundlings — was also 6’4." The character was a guy in World War II and at one point in the bit I turn to Tim, who would be on my left, and go, "You see, Captain …"

So anyway, I get in there, and I do my characters, and it was about four minutes and you were supposed to do like eight minutes. And Lorne goes, Anything else? So Randy turns to me and he says, "Why don’t you do that thing about your grandmother?"

So I started doing it, and then at the point where I say, "You see, Captain" … I turned and looked up and there was … Randy. So I kind of did a double-take.

Later, Al Franken told me it was that double-take thing that he thought was so funny. And I wasn’t even trying to be funny; I was just, you know, surprised to see someone different than Tim. But that’s what got me on the show.