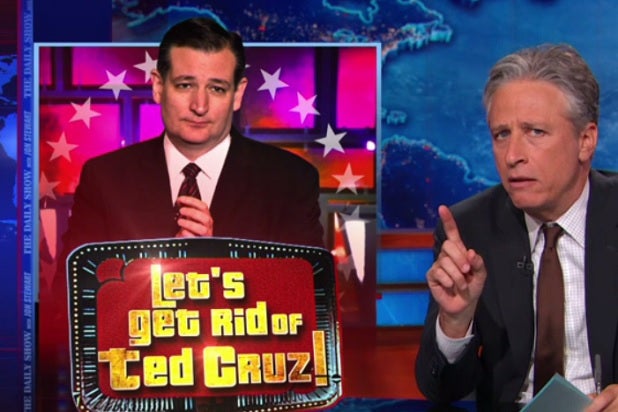 In an effort to clear an increasingly crowded field of Presidential hopefuls, “The Daily Show’s” Jon Stewart proposed that the Republican party play a game of “Let’s Get Rid of Ted Cruz” on Tuesday night.

“Because Ted Cruz cannot live up to the extremely high standards set for a candidate by — Ted Cruz,” Stewart said. He then played video of Ted Cruz stating that President Obama should be ashamed for spending all of his time fundraising and that he would vote “No” on the appointment of attorney general candidate Loretta Lynch.

Lynch was eventually approved by the Senate, with Cruz being the lone senator to abstain. The reason? He was on his way to a fundraising event in Texas and missed the vote.

Stewart also called out Cruz for claiming that the President has inflamed racial tension in the U.S., then played a video in which CNN’s Dana Bash asks Cruz to clarify his comments.

After Cruz concluded his remarks — which bore a resemblance to the original statement requiring clarification — Stewart said, “Come on, Cruz, all you did was take like a minute to say the exact same thing, just rephrasing what you said before.”

Stewart then played video of Cruz criticizing the President for pushing his own agenda by building “a straw man of the opposition and then to vilify a caricature.” The Comedy Central host then played a clip of Cruz at a speaking event in which he said those who oppose the Religious Freedom Restoration Act are waging a “jihad” against Christians.

“We want a President who brings people together. A President who understands if you’re pro-marriage equality, you’re the same as ISIS,” Stewart said.