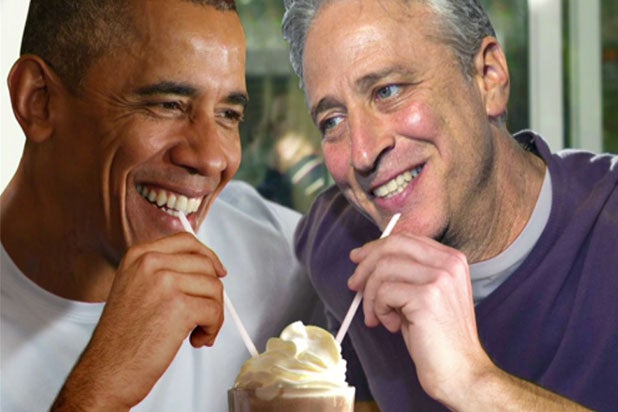 Jon Stewart dropped by Tuesday’s episode of “The Nightly Show with Larry Wilmore” to talk about his alleged “secret” meetings with President Obama at the White House.

Stewart, referred to as the Senior “Don’t Give a Shit Anymore” correspondent by Wilmore, shed some light on how the president must be feeling as he heads into the final stretch of his term.

“Is it true Obama called you down to the White House like twice for ‘secret’ meetings?” Wilmore asked, referring to the Politico story that alleged Stewart visited the White House for clandestine meetings with the president.

“The Daily Show” host met privately with the President at the White House on a number of occasions, including during the 2011 budget debate and the 2014 Ukraine crisis, according to a new report by Politico.

“I don’t know if they were secret, I mean … I’m in the visitor’s log, and they took pictures at the meeting,” Stewart responded as he shared a photo of the duo sharing a milkshake.

“So you think he was trying to influence you and the jokes you make? That’s a little dangerous,” Wilmore asked.

“I think that was what he’s trying to do, because I have a television show and sometimes we say some pretty shitty things about him and his policies,” Stewart responded. “I’m pretty sure I was there because he ran out of people to watch ‘King Ralph’ with.”

When asked whether Stewart believes he is in “Do Not Care” mode, Stewart said no, and that he is in “‘I’m gonna build me a library with my name on it’ mode.”

Stewart’s last episode of “The Daily Show” airs Aug. 6. Drinking a Budweiser on last night’s episode of “The Nightly Show,” Wilmore asked Stewart, “Seriously, Jon, you’re not even trying anymore. Last night, you did an entire segment and you didn’t even talk!”

“There’s something I never told you, Larry,” said Stewart. “I can’t read.”

“I’m doing it right now,” he responded as he took a sip of his beer.