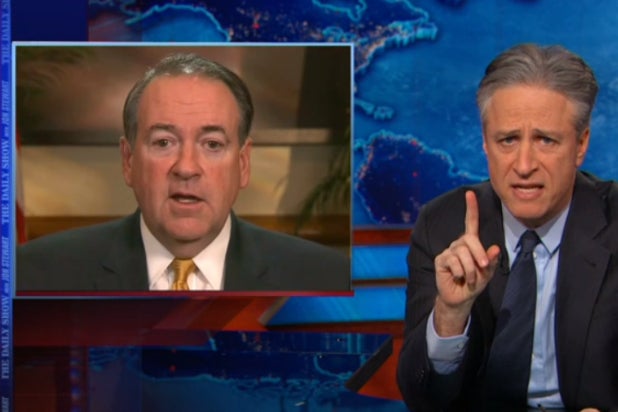 Jon Stewart thought he had caught Barack Obama in a “classic ‘Daily Show’ gotcha,” but the host’s Monday night plans had to shift on a dime when just before show taping the government cleared up what had been an apparent military bookkeeping scandal. Thankfully, Mike Huckabee said something pretty stupid, bailing out the Comedy Central late-night show from an available-fodder standpoint.

The Republican Huckabee maintained his strong conservative stances while out on a book tour, speaking out against same-sex marriage and his refusal to “evolve” from what he calls a “Biblical issue.”

“It’s like asking somebody who’s Jewish to start serving bacon-wrapped shrimp in their deli,” Huckabee stated, explaining why his opinion on the matter will not be altered, even in a changing environment.

“First of all, let me just clarify something: Not all Jews own a deli,” Stewart quipped. “Some of us are lawyers who represent deli owners.”