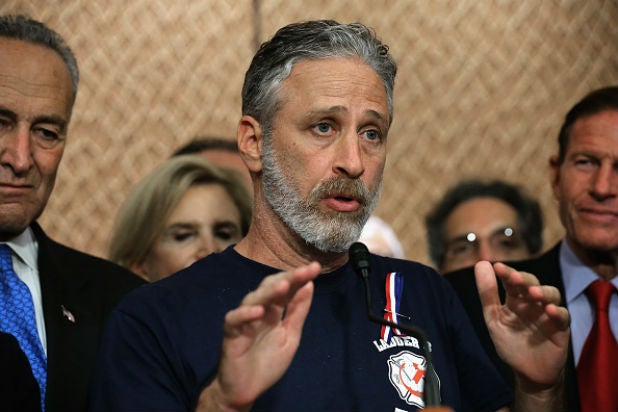 Jon Stewart broke the serious tone of a rally for 9/11 first responders Wednesday in Washington, D.C., by warning those in attendance of “toxic levels of bullshit” on Capitol Hill.

“Today on the Hill, you will be exposed to possibly toxic levels of bullshit and arrogance,” Stewart said. “You’re strong men and women. But these are conditions you may never have faced before. Buckle your seat belts, and let’s get this done.”

Stewart is leading the charge along with U.S. Sen. Kirsten Gillibrand (D-NY) to renew the Zadroga Act, which has provided $1.6 billion for health care and monitoring programs for thousands of people with health problems related to their work at Ground Zero after the 2001 terrorist attacks. The bill is set to expire next month.

“Why is it incumbent on our first responders to have to consistently push to get the benefits that are coming to them purely for their acts of valor?” he continued, according to CBS News.

“Nobody had to lobby you to rush to those towers on that day,” he said. “I was living in downtown Manhattan, and I can never repay the debt to the first responders who came down and brought stability and humanity, not just to lower Manhattan, but to all of New York City, and to the entire country.”

A native New Yorker, Stewart aired a moving tribute to the victims of the attack on his first “Daily Show” episode after 9/11 that aired on Sept. 20, 2001.

Following a nine-minute tearful description of his personal view of the horrific events, he said:

“The view … from my apartment … was the World Trade Center … and now it’s gone, and they attacked it. This symbol of American ingenuity, and strength, and labor, and imagination and commerce, and it is gone. But you know what the view is now? The Statue of Liberty. The view from the South of Manhattan is now the Statue of Liberty. You can’t beat that.”

Stewart retired as host of Comedy Central’s “The Daily Show” on Aug. 6 after 16 years.