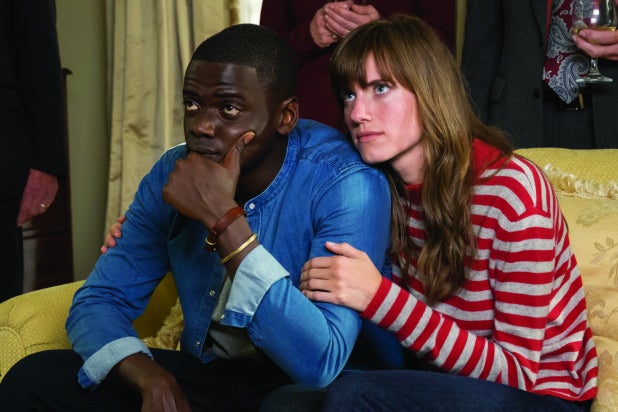 Jordan Peele’s horror film “Get Out” earned $1.8 million at the Thursday box office when it opened in 2,240 theaters.

Heading into the weekend, tracking analysts had anticipated Peele’s directorial debut to open in the high-teen millions with the potential to debut as high as $24 million. The thriller stars Allison Williams, Daniel Kaluuya, Bradley Whitford and Catherine Keener.

The question this weekend will be whether “Get Out” can finally dethrone “The Lego Batman Movie” from the top box office spot. If “Get Out” makes $24 million, that would be enough for the film to take the No. 2 spot from “Fifty Shades Darker,” which made $24 million in its second weekend in theaters. “Lego Batman,” meanwhile, held on to the top spot at the domestic box office last weekend with a three-day total of $32.6 million from 4,088 screens. Analysts told TheWrap that the Blumhouse film is very likely to beat “Lego Batman” on Friday but the latter will need a strong drop-off of at least 20 percent to give up the throne.

The film’s Thursday preview numbers are in line with those of previous horror movies: Last year’s “Don’t Breathe” earned $1.88 million on Thursday night and the other 2017 Blumhouse film, “Split,” grossed $2 million that night. “Get Out” managed to surpass this year’s “Rings,” which only raked in $800,000 on Thursday.

In the days leading up to the movie’s release, “Get Out” had held a rare Rotten Tomatoes score of 100 percent. Now, the film has 107 reviews and is certified “Fresh.”

The film is about interracial couple Rose (Allison Williams) and Chris (Daniel Kaluuya), who reach a meet-the-parents stage in their relationship, leaving their metropolis for a country gathering hosted by mom (Catherine Keener) and dad (Bradley Whitford).

Chris expects chatter about their respective backgrounds and skin colors — not a series of disturbing social interactions and a revelation that quite a few young black men seem to disappear in the area.

“Get Out” should have little competition from other new releases, which include Open Road Films’ “Collide” and Summit Premiere’s “Rock Dog.”

“Collide” is expected by trackers to make $5 million this weekend against a $29.5 million budget from approximately 2,000 locations. The action film stars Nicholas Hoult as an American backpacker who ends up getting involved with drug dealers in Germany. Soon, he finds himself in danger as his employers hunt him down on the famous speed limit-free roads of the Autobahn. The film also stars Felicity Jones and Ben Kingsley.

“Rock Dog” set a record for the most expensive animated film backed by a Chinese studio with a budget of $60 million. Released by Huayi Brothers, the film was an overseas bomb, making only $7.2 million in China and South Korea. Trackers expect it to make another $7 million here from an estimated 2,050 screens.

Based on a graphic novel by Zheng Jun. It stars Luke Wilson as a Tibetan Mastiff who leaves behind his life with a family of guard dogs to find stardom as a rock musician in the big city. Directed by Ash Brannon, the film also stars Lewis Black, J.K. Simmons, and Eddie Izzard.