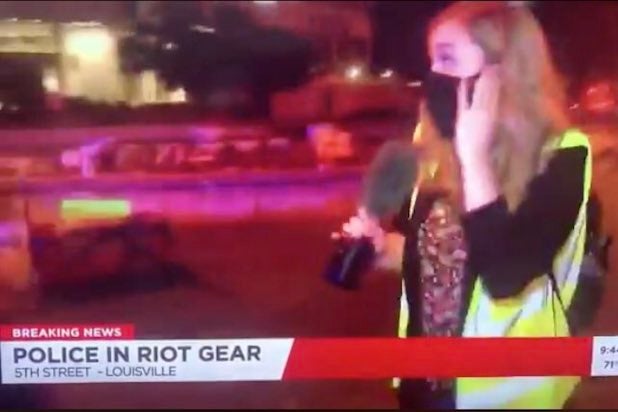 Journalists across the country covering the protests and unrest in response to the murder of George Floyd have been attacked and arrested by police, with several of those incidents occurring on air.

“Police forces have regularly attacked and arrested journalists at protests in this country. But often it has been unfamous [sic] journalists from non-corporate outlets, so no one paid attention to it,” Jeremy Scahill of The Intercept wrote. “Now, the police are deliberately & consistently attacking corporate journalists too.”

One such incident occurred in Louisville, Kentucky, where reporter Kaitlin Rust for WAVE 3 was covering a march protesting the death of Breonna Taylor, a woman who was fatally shot by police in March. While reporting from behind the protest line, Rust and her cameraman were fired upon by police with pepper balls during a broadcast.

“There is simply no justification for the Louisville police to wantonly open fire, even with pepper balls, on any journalists under any circumstances,” WAVE 3 said in a statement. Jessie Halliday, special advisor to Louisville Metro Police, apologized in a statement to the Courier Journal.

“It’s not something that should have occurred if she was singled out as a reporter, and that is what the video looks like occurred,” Halliday said. “It’s a little difficult to determine, in the midst of all of this, who that officer is. … We will be taking a look at the video again after this situation is resolved, and if we need to do any investigation for discipline, we will do that.”

In Denver, local news team Adi Guajardo posted a picture of her cameraman, who was hit four times by a volley of paintballs and tear gas from police. “Luckily, I ducked and avoided getting struck,” she wrote.

Our photographer got hit four time and our camera got hit.

In Minneapolis, photographer Linda Tirado said on Twitter that she was hit and permanently blinded in her left eye by what was believed to be a rubber bullet. Doctors have advised her to stay away from further protests.

Hey folks, took a tracer found to the face (I think, given my backpack) and am headed into surgery to see if we can save my left eye

“It’s absolutely bonkers that before I got on the road I made sure I had local criminal defense counsel in case I’m arrested in the course of my job as a journalist,” she wrote on Twitter. “I have bylines in five continents but I don’t trust that I’d be considered press, because I’m freelance.”

Several journalists were arrested in Las Vegas during demonstrations, including freelance photographer Bridget Bennett, who was there on behalf of AFP, and Ellen Schmidt, photojournalist for the Las Vegas Review-Journal.

“It is appalling that Las Vegas police officers, who have nothing to do with what happened in Minnesota, would so forcefully take into custody two people who were obviously working photojournalists and posed no threat to law enforcement or public safety,” Review-Journal executive editor Glenn Cook said in an email to CNN. “They never should have been touched, let alone arrested and then booked into jail.”

The arrests and violence have extended to mainstream media reporters. MSNBC anchor Ali Velshi, who was covering the Minneapolis protests on the ground, was struck in the leg by a rubber bullet on Saturday. The Huffington Post said in a statement that one of their reporters, Chris Mathias, “has apparently been taken into custody while doing his job as a journalist” and was released early Sunday morning. CNN correspondent Omar Jimenez and crew members Bill Kirkos and Leonel Mendez were taken into police custody in the middle of a broadcast right after they told authorities they would move to whatever location was best.

The police violence against reporters has been decried by journalists and officials alike.

“To the police arresting, targeting, or shooting journalists: Don’t for a minute think your unlawful actions will go unanswered. We will hold you to account,” the ACLU said in a statement on Twitter. “To journalists risking their lives to keep the public informed: Stay safe. We thank you and we’ve got your back.”

To the police arresting, targeting, or shooting journalists: Don't for a minute think your unlawful actions will go unanswered.

To journalists risking their lives to keep the public informed: Stay safe. We thank you and we've got your back.

“When journalists are attacked, societies are attacked,” UN Secretary General Antonio Guterres said. “No democracy can function without press freedom nor can any society be fair without journalists who investigate wrongdoing and speak truth to power.”

No democracy can function without press freedom nor can any society be fair without journalists who investigate wrongdoing and speak truth to power.

Adolfo Guzman-Lopez, a reporter with Pasadena City College’s KPCC Radio, was on the scene of protests in Long Beach when police in riot gear moved in. Shortly thereafter, he was hit with a rubber bullet in the neck. “I had just interviewed a man with my phone at 3rd and Pine and a police officer aimed and shot me in the throat, I saw the bullet bounce onto the street,” he tweeted, along with a photo of the bruise that was left. “The rubber bullet hit stings like a mf.”

I just got hit by a rubber bullet near the bottom of my throat. I had just interviewed a man with my phone at 3rd and Pine and a police officer aimed and shot me in the throat, I saw the bullet bounce onto the street @LAist @kpcc OK, that’s one way to stop me, for a while pic.twitter.com/9C2u5KmscG

Fox News Channel’s Leland Vittert was harassed while covering the protests in Lafayette Park outside the White House in Washington, D.C. late Friday night-early Saturday morning when as many as a dozen protesters surrounded him and his crew. After a protester advanced towards Vittert, he and the Fox News crew made a run for it, only to be chased by the angry, growing crowd. As they fled, they were cursed at, “hit with projectiles” and “a Fox News camera was broken when a member of the mob tried to grab it.”

The Daily Caller recorded the event, that clearly rocked Vittert. Warning: the language is NSFO.