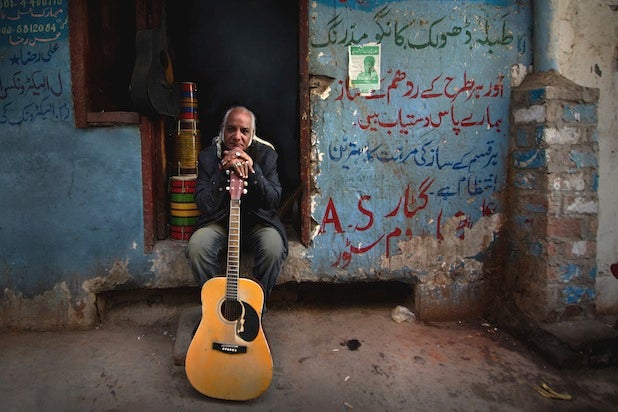 Lots of film festivals love music documentaries, which tend to attract enthusiastic crowds and frequently win audience awards. And the Tribeca Film Festival has long embraced the genre, with this year’s entries including “In My Father’s House,” “Orion: The Man Who Would Be King,” “As I Am: The Life and Times of DJ AM” and “Kurt Cobain: Montage of Heck.”

But it’s unlikely any other music doc could have the same combination of rousing music, emotional clout and social and political import as “Song of Lahore,” a joyous and riveting film that premiered over the weekend at Tribeca.

Directed by Andy Schocken and Sharmeen Obaid-Chinoy, the film about Pakistani music tells a fascinating story and mixes glorious artistry with a background that has real resonance in a world in which fundamentalist Islam is on the march.

And it led to indelible moments at both of its public screenings over the weekend, when some of the subjects of the film brought their instruments to theaters in New York City to perform for audiences that had just watched their story onscreen.

“We just wanted to showcase the voices of this music,” said Obaid-Chinoy in a Q&A after Sunday’s screening – but her doc does much more than that, though it does offer a marvelous showcase for the vibrant, heavily rhythmic and often percussion-driven classical music that once flourished in Lahore before it was almost driven out of existence.

The city, described as “one of the great art centers of the subcontinent,” was home to a thriving musical culture that in the 20th century found its expression in film scores recorded in the town that became known as “Lollywood” and was the center of Pakistani film.

But after a 1977 coup, Sharia was instituted and music was deemed sinful. Restrictions lessened in the ’90s, but it was too late. “In that dark era, we lost our music,” says one musician. “The younger generation has no idea what our music means – they turned to keyboards and rock ‘n’ roll.”

And when the Taliban arrived on the scene, music was once again discouraged, leaving the few remaining musicians to play in soundproof rooms.

Knowing that they no longer had a local audience, the musicians in the Sachal Studio Orchestra opted to reach for an international audience, incorporating Western harmonies and then recording their takes on American jazz classics like Dave Brubeck’s “Take Five.”

A video of that song exploded after it was shown on BBC One, and the musicians landed an invitation to play with Wynton Marsalis on the prestigious Jazz at Lincoln Center program.

The film chronicles that trip, but it is really a rich and affectionate portrait of a handful of men who refuse to let their culture die in the face of official repression and public indifference. And the music, which on the group’s recent recordings can seem a bit too watered-down, is joyous and ecstatic: The scenes from their triumphant Lincoln Center concert include lots of moments that will have most of the audience grinning from ear to ear, and other passages – for instance, a flute duel between Pakistani and U.S. musicians – that are laugh-out-loud playful.

Also read: How Twitter May Have Helped Ignite ISIS Firestorm

Academy voters have been in the habit in recent years of giving gold statues to documentaries about musicians, with “Searching for Sugar Man” and “20 Feet From Stardom” winning back-to-back Oscars in 2013 and 2014 before “Citizenfour” broke the streak this year.

It’s far too early to predict next year, but of all the docs I’ve seen at Tribeca, “Song of Lahore” seems the likeliest to be a real awards contender. And the single, brief live performance the audience saw at Chelsea’s Bowtie Cinemas on Sunday night – a spirited acoustic run-through of “Take Five” – showed exactly why festivals like Tribeca keep booking music docs.