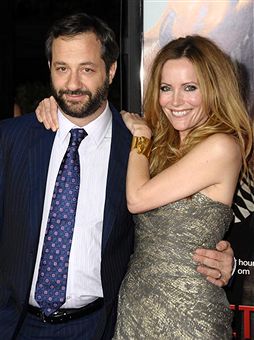 Judd Apatow has signed on to produce "Business Trip," a Universal Pictures comedy that will star his wife, actress Leslie Mann, reports Deadline.

Stacey Harman wrote the "Business Trip" script, which is described as "The Hangover" for women. The story follows a group of ladies who go on a corporate trip but wind up doing anything but business while on company time.

Some of Deadline’s commenters, as well as other movie blogs, seem to suggest that Mann only gets work because she’s married to Apatow, and that the gifted multihyphenate should stop casting his family in his films.

I think that’s completely ridiculous and unfair to Mann, who is not only gorgeous but also quite talented. She did quality work in both "Big Daddy" and the Apatow-produced "The Cable Guy," and was utterly hilarious in Apatow’s "The 40 Year Old Virgin" and "Knocked Up."

People seem to be knocking her because they didn’t like the second half of "Funny People," but there was nothing wrong with her performance. The second half just slowed down and switched gears (not her fault), and for the record, I loved "Funny People," which in my opinion was one of the top 15 films of last year.

As far as I’m concerned, Mann is welcome in any movie, whether it’s directed by Apatow or not. She’s a warm and delightful onscreen presence, and more importantly, she looks like a real (beautiful) woman.

Mann recently starred in the non-Apatow movies "17 Again" and "Shorts" (proving she does do her best work when she collaborates with her hubby), and she also reunites with Jim Carrey in the upcoming (eventually) comedy "I Love You Philip Morris." She next stars in Elgin James’ coming-of-age drama "Goodnight Moon."

Benderspink’s Chris Bender and JC Spink are also producing "Business Trip." Benderspink exec Langley Perer and manager Jill McElroy conceived the idea last year after a spate of business trips, and will serve as producers in some capacity. There’s currently no director attached yet, but Apatow isn’t expected to sit behind the camera.

Mann is represented by CAA, while UTA represents Apatow and Harman.