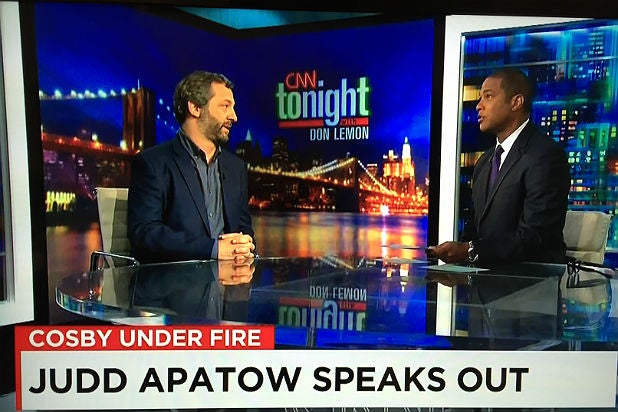 Judd Apatow has been eager to slam Bill Cosby at any given opportunity and his latest media platform was Don Lemon’s “CNN Tonight” show on Wednesday, where he called the sexual assault allegations “terrifying.”

However, it was Lemon who had the harshest words to say about the shamed comedian, calling him “one of the most prolific rapists in history” if all the allegations are true.

With Apatow appearing to promote his latest hit comedy “Trainwreck,” the conversation naturally turned to Cosby when Lemon asked about an alleged victim the director is friends with, but who has not identified herself.

“It is someone who I know very well, she just told me what happened and I thought, ‘Wow, every one of those stories is true,'” Apatow replied.

Also Read: Judd Apatow Says Bill Cosby 'Got a Pass Because He's Like a Pedophile Priest'

“People say, ‘They’re out for something.’ No one wants anything really. But the truth is, they deserve something.

“We all have to understand that 80 percent of rape victims don’t come forward … they don’t tell the police … We are are basically telling women not to stand up for themselves,” he explained.

Lemon went on to say, “Here is what I think is interesting and I don’t think people have put this together yet, with all these people coming forward, if so … this would make him one of the most — if not the most — prolific rapists in history. To get away with that number of crimes.”

“It’s terrifying,” Apatow said, before criticizing CNN for spending so much airtime on the New York prison escapees and not enough on Cosby. “He’s out right now … he really hasn’t paid any price for it at all. It’s important that people try to do something about it, because if not it says to other people ‘you can do it [rape] and you’re not going to get in trouble.'”

Lemon pointed out that Cosby has claimed innocence through his attorneys. “He has denied a lot of things, but he hasn’t denied getting seven prescriptions for Quaaludes and giving them to women … they were the Ambien of their time … it’s a knockout drug,” Apatow said.

The “Bridesmaids” producer has been a vocal critic of Cosby ever since over three dozen women accused the now infamous comedian of drugging and raping them, going back all the way to the 1970s.

Apatow went on to compare Donald Trump to the “crazy girl on the ‘Bachelor’ who you pray doesn’t get kicked off too early because they are fun to watch, but you don’t want them to win.”