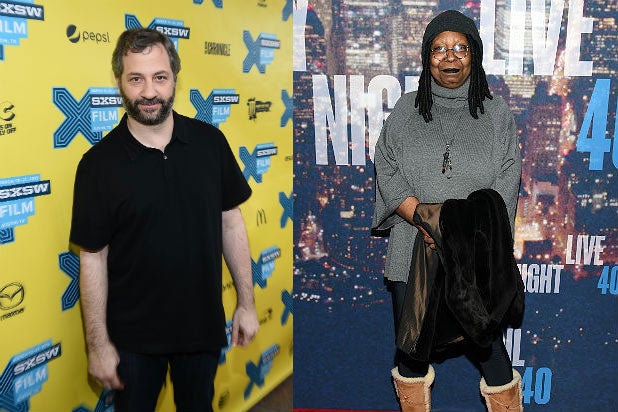 Judd Apatow has made no secret of his disgust for Bill Cosby, and on Thursday he took to Twitter to criticize Whoopi Goldberg‘s support of the disgraced comedian.

“I think is trying to be a loyal friend. It is sad that is so sick that he puts his friends in that position,” the director-producer tweeted.

“He admitted to giving this [Quaaludes] to women to get them to have sex. So what are you defending?” Apatow went on to ask.

“The 40 Year Old Virgin” and “Trainwreck” filmmaker was reacting to Goldberg’s decision to stand by her longtime friend in the wake of mounting accusations and a damning 2005 deposition released Monday in which Cosby admitted to having acquired Quaaludes to give to young women he intended to have sex with. Cosby also testified that he had obtained seven prescriptions for the sedative.

On Wednesday, “The View” host loudly voiced her outrage over what she suggested is the public assumption that Cosby is guilty of sexual assaulting and raping nearly 40 women. “No one has convicted him, he has not been arrested, and the bottom line is that’s the law — innocent until proven guilty.”

In his response to Goldberg’s comments, Apatow said: “It is sad that he betrayed his community & it has soiled his achievements. But he did it. Not the press. 7 prescriptions.”

The filmmaker reminded his 1.23 million Twitter followers, “it is wise to be careful but at some point we need to support the survivors of his violence.”

Also Read: Judd Apatow Defends His Bill Cosby Criticism: 'Aren't We Supposed to Say We Don't Like This?' (Video)

Earlier this week, Apatow slammed Cosby via Twitter following the release of the court documents from a 2005 sexual assault lawsuit. He then gave a statement to Esquire calling on Cosby’s wife, Camille Cosby, and his former co-star on “The Cosby Show,” Phylicia Rashad, to publicly support the comedian’s accusers.

Read his latest tweets below.

I think @WhoopiGoldberg is trying to be a loyal friend. It is sad that Bill Cosby is so sick that he puts his friends in that position.

but @WhoopiGoldberg – he admitted to giving this to women to get them to have sex. So what are you defending? pic.twitter.com/8jDBXXHwww

Remember – @WhoopiGoldberg he paid off women to avoid the courts. So you can't say the courts didn't convict. He used wealth to avoid it.

It is sad that he betrayed his community & it has soiled his achievements. But he did it. Not the press. 7 prescriptions. @WhoopiGoldberg