The Michael Jackson movie is a go, but the deal drama surrounding his estate is far from over.

On Monday, Los Angeles Superior Court Mitchell Beckloff approved a deal between Jackson’s estate, concert promoter AEG Live and Sony that would turn feature footage of Jackson’s final rehearsals for his London-set "This is It" comeback tour into a feature film, to be released on Oct. 30.

But Beckloff delayed a decision involving contracts between AEG Live and merchandise company Bravado after Jackson’s mother, Katherine, argued that AEG Live should not be given a share of perpetual video rights of the rehearsal footage.

Seperately, Beckloff said he will now appoint a special guardian — not yet chosen — to represent Jackson’s three children, whose interests he said were not being represented and were different than those of Katherine.

Lawyers for all sides involved in the various deals said any delay could cost millions and derail plans. 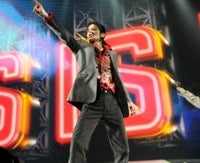 As or the film, Sony put out a statement saying that "This Is It" is being produced with the full support of Jackson’s estate and will be drawn from hundreds of hours of rehearsal and behind-the-scenes footage, captured in high definition with digital sound.

Sony acquired the rights to Jackson’s rehearsal footage for $60 million.

The film will also offer sequences in 3D and will feature interviews with some of Jackson’s friends and collaborators.

The majority of the film’s footage was shot in June, 2009, at Staples Center in L.A. and The Forum in Inglewood, as Jackson prepared for the series of fifty concerts Jackson planned to present at the O2 Arena in London.

Sony Pictures and Sony Music will co-produce the film with AEG Live and the Jackson estate, and Sony Pictures will distribute the film worldwide. Randy Phillips and Paul Gongaware of AEG Live will serve as producers.

Proceeds that the Jackson Estate earns from the film’s release will benefit the Michael Jackson Family Trust, the entity that Mr. Jackson specified in his will that receives all of his assets.

“Our goal is to work with partners who treat Michael’s legacy with dignity and respect," said Branca, "Sony and Michael enjoyed a long and mutually beneficial history together, and it’s only fitting that the relationship continues.”

"People who have seen this footage are astounded by the amazing quality of Michael Jackson’s performance," said Lynton. "We understand the importance of producing a film that pays tribute to Michael as an artist."

Five of Jackson’s solo albums, "Off the Wall," "Thriller," "Bad," "Dangerous" and "HIStory" — all with Sony’s Epic Records — are among the top-selling discs of all time.