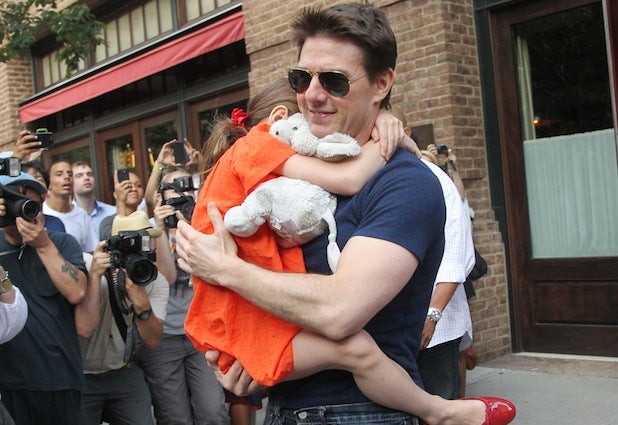 A federal judge tossed out Tom Cruise‘s attempt to force Bauer Media to reveal its possible ties to Nazis on Tuesday, saying the connection to his libel suit against the multinational publisher of In Touch and Life & Style magazines is just too weak.

The judge also denied Team Cruise’s request to force Bauer Media to reveal the identity of its anonymous sources for stories it wrote claiming that Cruise had “abandoned” his daughter Suri following his divorce from Katie Holmes.

In a Los Angeles federal district court, Magistrate Judge Jacqueline Chooljian was reluctant to let Cruise’s team explore the possibility of Bauer Media’s Nazi sympathies, saying it was outside the scope of the case — and adding that the defendants being sued are not the parent company anyway.

Cruise was not in court, but his lawyer Bert Fields was there to make arguments in the discovery hearing, meant to determine what information lawyers would be able to dig up and present at trial.

Cruise sued Bauer for $50 million after Life & Style and In Touch ran headlines in 2012 claiming he had “abandoned” his daughter Suri — which the “Mission: Impossible” actor vehemently denies. Cruise’s legal team asked the court to compel Bauer to admit to Nazi connections, arguing that would show the publications were biased against him for his Scientology connections and his anti-Nazi film “Valkyrie.”

Bauer lawyers argued that Cruise’s request for Nazi admissions was “grossly over broad, offensive and harassing,” stressing that there was no connection between the editors on the Cruise articles and the German owners of their magazines, and adding that Bauer has Jewish and gay employees — so the accusations of bigotry are unfounded.

Chooljian sided with Bauer in tossing out the Nazi angle, but suggested that Cruise’s lawyers can appeal her decision. Asked by TheWrap whether they’d mount such an appeal, Cruise lawyer Aaron Moss said, “I don’t know. We’ll have to talk about that.”

Fields expressed disappointment in the Nazi portion of the ruling but suggested that Cruise would prevail at trial in spite of it.

Cruise also wanted Bauer’s magazines to reveal their anonymous sources — or admit that they didn’t have any in the first place. The judge quickly ruled that Bauer does not have to reveal its sources’ identities, but insisted that the publisher have all of its sources and witnesses entered into the record at this time; she even made Bauer sign a sworn declaration — on penalty of perjury — that it not bring forth any “surprise” witnesses when it comes time for trial.

Pamela Chelin contributed to this report from U.S. District Court in Los Angeles.