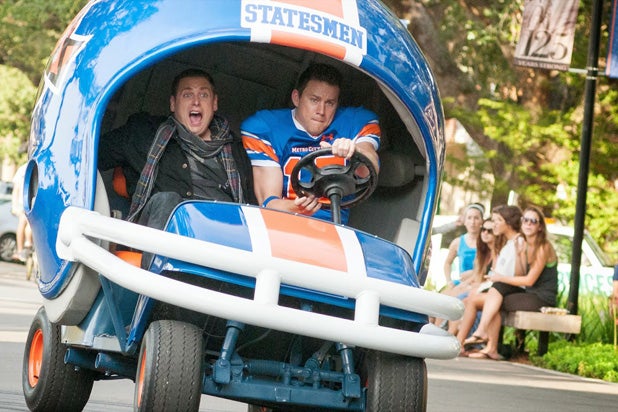 Sony Pictures will continue to grow its popular “Jump Street” universe, commissioning dual development of both a female-driven spinoff and a franchise crossover with “Men in Black” that was originally outlined in its leaked emails, TheWrap has learned.

“Broad City” writers Lucia Aniello and Paul Downs have been hired to write the female-driven spinoff, which will feature the same comedic tone as “21 Jump Street” and its even more successful sequel.

“21 Jump Street” took aim at reboots, while “22 Jump Street” targeted sequels, so it makes sense that the next “Jump Street” movie will send-up the current trend of Shared Movie Universes by having Jonah Hill and Channing Tatum enter the “Men in Black” universe and investigate aliens.

Producer Neal Moritz and his Original Films will steer dual development of the “Jump Street” extensions along with Hill, Tatum and Phil Lord and Chris Miller, who directed the first two films.

Dakota Johnson actually played one of the young officers in “21 Jump Street” before she starred in “Fifty Shades of Grey,” so it’s possible she could return to anchor the female-driven spinoff. Aniello and Downs have helped “Broad City” become a breakout hit on Comedy Central, and it’s also possible that Sony could recruit talent from that network, such as Amy Schumer, Jessica Williams and “Broad City” stars Ilana Glazer and Abbi Jacobson.

As for the “Men in Black” crossover, which writer-producer-star Hill was especially excited about in the leaked Sony emails, it remains unclear whether Will Smith would be involved, let alone Tommy Lee Jones or Josh Brolin.

“Men in Black 3” had the franchise’s highest global haul, with $624 million worldwide, though it also had the lowest domestic gross in the series, with only $179 million in the U.S. That indicates that while international interest has never been higher, American audiences are growing weary of “MIB.” “Jump Street,” on the other hand, has had higher domestic grosses than foreign grosses, so a combination of the two franchises may prove to be more beneficial to Sony at the worldwide box office.

Aniello and Downs are represented by UTA and 3 Arts Entertainment, and their hiring was first reported by the Tracking Board.