Last night’s “Biggest Loser” had the contestants literally jumping through hoops to stay in the game. And, make no mistake, the participants are now treating this life-altering opportunity as a game. It’s like Tracey the Sea Witch cast a spell before she left last week! 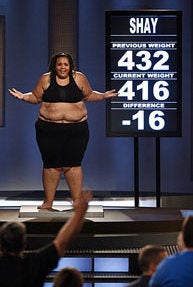 You know it’s never that simple, though. With clear alliances drawn, this season is delving into “Survivor” territory. This week there was a clear division with two groups of four: the young against the old.

While I don’t want to sound like a death panel proponent, I will say this: The older people have had a chance to live their lives. They all have spouses and children of their own. Heck, Liz isn’t even that fat (for a Southern grandma, at least)! Give the youngsters a chance at life. Besides, they all have “such pretty faces.”

Throwing more wrenches into the weight loss process were this week’s challenges, both of which proved to be pivotal in gameplay.

The first challenge awarded Allen a one-pound advantage. Then, in the “jumping through hoops” immunity challenge, Rudy and Shay made a deal to be the last two standing. Rudy broke his word and this elicited a string of insults from Shay as he jumped his way to immunity.

When it came time for the weigh-in, there were a few shockers. Shay was praying to lose 12 pounds and actually ended up losing 17. (I think a good 4 pounds of that was lost in tears.) An impressive number nonetheless, especially since it made her the first woman in “Loser” history to lose 100 pounds in 9 weeks!

Daniel and Amanda each lost 5 pounds, with Daniel falling under the red line. He was sent home immediately.Allen lost 10 pounds, which should’ve put him under the yellow line with Amanda. But he won the pop challenge, remember? His one-pound advantage saved him from elimination and the person with the next lowest percentage of weight loss was up for elimination.

Unfortunately, in this case, losing almost 20 pounds in one week was not enough to keep Shay above the yellow line. And how COULD it be? While she has lost 100 pounds, she still has over 200 to go. Somehow it doesn’t seem fair for her to compete physically or on the scale with people much smaller than her.

The most infuriating part of the episode was the voting process. Shay versus Amanda seems pretty clear-cut to me. And, I might add, it seemed pretty clear-cut to the Bob and Jillian as well. While Bob is close with Amanda, even he couldn’t argue when Jillian said Shay needed to stay more. It’s obvious. The woman weighs almost 400 pounds! Call it a game if you want but it is “bigger” than that, no pun intended.

As Bob said, “This is not just a reality television show. This is about eight people’s lives.”

Apparently the other contestants, now immersed in gameplay, did not get that memo. True, Amanda is not that much of a threat; even on her best week she only lost 7 pounds. But how much of a threat is Shay? Because of her size, her numbers have to be outstanding to even have a fighting chance against the other players. And yet, some of her competitors didn’t even want to give her a fighting chance at LIFE.

The fact that Allen, who would’ve been up for elimination himself if he hadn’t won the challenge, voted for Shay really ticked me off. Even worse was his explanation that he thought she had grasped the concepts of weight loss and had it under control. Give me a break!

And then there was Rudy. Here is someone who also set a “Loser” record, shedding 100 pounds in seven weeks. Before he revealed his vote he mentioned that it was based on goal setting.

Whoa. Maybe not so obvious.

His vote was to send Shay home. Perhaps a petty payback for their tiff at the circus? I couldn’t believe it. I literally had to put down my Cheetos and Dr. Pepper and rewind the DVR to process what had just happened.

Shay, the heaviest contestant in “Loser” history, was sent home.

I hope and pray that she finds the strength to lose the weight at home on her own. The absence of a “Where Is She Now?” transformation segment left me discouraged, though.

On the other hand, Daniel seems to be doing well at home. He has continued to lose weight and even has a girlfriend! In his update segment, it was quite the sobering image to see him juxtaposed against his friend and partner from last season, the morbidly obese David. You could see the sadness in Daniel’s eyes as David said that he had “more important” things going on now than losing weight.

It is a shame that both of these players had to leave this early. Shay really needed this opportunity for her health. As for Daniel, he’s about as inspiring as they come. (Like a white male Oprah, but more svelte!) For someone so young, he seems to be one of the few participants who actually gets it.

“Winning the show is not really winning,” he said. “Winning was making the decision to do it.”