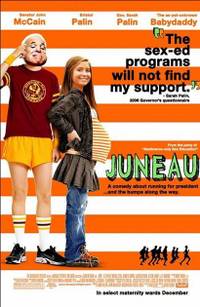 Mac MacGuff: And this, of course, is Juno.
Mark Loring: Like the city in Alaska?
Juno MacGuff: No.

– from "Juno," directed by Jason Reitman

Honest to Blog. What were the odds that commie-leftie-Obama-loving Hollywood would create the real-life template for the shenanigans playing out at the Republican Convention in St. Paul, Minnesota?

We’re talking about the Sarah Palin drama about to come whirling down into the Xcel Energy Center like some hurricane blown up from the south. Except that this hurricane is coming down from the north, west of Juneau, Alaska, led by a former beauty queen turned schoolmarm politician-turned-vortex of hot molten media interest.

Juneau, Juno, what were the odds? It sure seems as if life will be imitating art today, as Palin brings her MacGuff-like clan — teenaged pregnant daughter, Bristol, and the teenaged father of the baby, Levi Johnston. Rise, evangelical base, and hail their choice to keep the baby.

Reitman, first of all, is Canadian and not voting.  Regardless, any similarities between Juno and Juneau are, he insists, pure coincidence. "Twenty-four hours into this story, there’s no real way to tell whether life is imitating art or not," he said from his home in Los Angeles. "You’ve got a 17-year-old pregnant teenager, and Juneau is the capital of Alaska. The coincidence is cute."

But, he insisted, his movie tried hard not to make a political statement. "’Juno’ is not about pregnancy," he said. "It’s a location. I do not want to tell people what to think. They have to come up with their own conclusion. Just don’t judge." (Isn’t that its own kind of conclusion?)

Reitman insists he has no political point of view on any of this. Who’s business is Palin’s daughter’s pregnancy anyway?

"Juno" is not about choosing to keep a baby or not, he said: "It’s just about a teenaged girl who grows up too fast, and a 30-year-old man who won’t grow up." Then the director went to put his toddler daughter to bed.