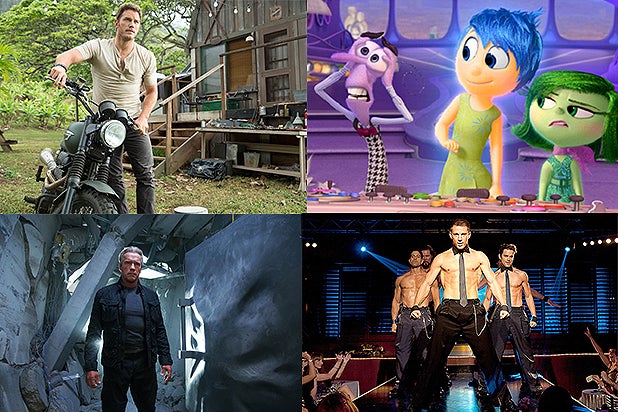 Arnold Schwarzenegger and his “Terminator Genisys” reboot couldn’t break out, and it was far more grind than bump for Channing Tatum and the six-packed strippers of “Magic Mike XXL,” the two wide openers at the box office over the July 4 weekend.

That’s largely because two heavyweight holdovers, the blockbuster “Jurassic World” and Pixar Animation’s “Inside Out,” dominated domestically for the third straight weekend. Universal’s dinosaur sequel is on pace to claim its fourth consecutive weekend win, taking in an estimated $30.9 million, and for the third straight time outpace the Disney family film, which took in $30.1 million. But the margin is narrow enough that the results could change when final numbers come in Monday.

“Jurassic World” will pass $550 million domestically this weekend, after 24 days — the fastest any film has hit that milestone. The sequel to Steven Spielberg‘s 1993 sci-fi classic is now the fourth highest grossing film domestically and the fifth-highest worldwide with $1.38 billion.

Paramount and Skydance Production’s reboot of the “Terminator” sci-fi franchise, which was launched by James Cameron in 1984 and helped turn Schwarzenegger into a pop icon, was third with an estimated $28.7 million, and has rung up $44.1 million since opening Wednesday.  That’s more than $10 million under analysts’ projections and the lowest three-day opening for the franchise since the first “Terminator” film debuted in 1,005 theaters with just over $4 million.

That means “Genisys” will have to connect with foreign moviegoers so that overseas returns will help offset its $155 million production budget. The stakes are high, because Paramount has sequels scheduled in 2017 and 2018. The film is off to a strong start with $74 million from abroad this weekend, and it has grossed nearly $130 million globally as of Sunday. It’s set to open in Japan, Germany and Spain next weekend and China down the road.

The audience for ‘Genisys” was 62 pecent male and 65 percent over the age of 25, and they awarded a “B+” CinemaScore to the film, which co-stars Jason Clarke, Emilia Clarke, Jai Courtney and J.K. Simmons, and was directed by Alan Taylor.

Also Read: 'Terminator' for Dummies: Everything Newcomers Need to Know Before Seeing 'Genisys'

“International is the good news,” said Megan Colligan, president of worldwide distribution and marketing at Paramount. “You’d like the domestic numbers to be as strong as possible, but wins and losses are calculated on a global basis.

“Domestically, I think the competition from ‘Jurassic World’ was tougher than we anticipated, and we got off to a sluggish start. We played well through the weekend, but we never recovered from Wednesday and Thursday,” she said.

Roughly 45 percent of the domestic haul for “Genisys” came from 3D, which has seen a resurgence in popularity this summer, and IMAX Theaters accounted for 12 percent.

Warner Bros. wishes moviegoers had stuffed a few more dollars into the G-strings of “Magic Mike XXL,” which took in $27.7 million over the five days and an estimated $12 million between Friday and Sunday. It missed projections by about $10 million too, and the debut was a little more than a third of the $34 million that the original “Magic Mike” shimmied to in its first three days.

That one, also R-rated, cost just $7 million to make and grossed $167 million globally in 2012. But with star Matthew McConaughey and director Steven Soderbergh sitting out, the sequel was a long shot to match that, but its modest $15 million production budget will help.

“Magic Mike XXL” played almost exclusively to women, who made 96 percent of the audience and gave it an “A-” CinemaScore. The age breakdown was more balanced, with 51 percent over the age of 35.

“We’re down, but I don’t think we’re out,” said Dan Fellman, Warner Bros. domestic distribution chief. “Cultural patterns change. We used to program female-skewing films on Super Bowl weekend, but that changed because now everybody goes to the party even if they don’t watch the game. I think July 4 is like that.”

Things didn’t get much better for Seth MacFarlane’s “Ted 2,” which brought in $11 million over the three days for Universal. That’s a considerable 67 percent drop for the R-rated comedy, which has taken in $58 million in two weeks.

The roughly $37,000 per-screen average of the A24 documentary “Amy,” the story of British soul diva Amy Winehouse, who died tragically at the age of 27, was the best of any film this weekend. It brought in $222,000 from six screens ahead of next weekend’s wider release.

The overall box office was about six percent better than last year, which was the worst July 4 weekend in nearly three decades. The holiday fell on a Friday in 2014, and on a Saturday this year, and that hurt because fireworks focused-movie fans missed a typically busy day.