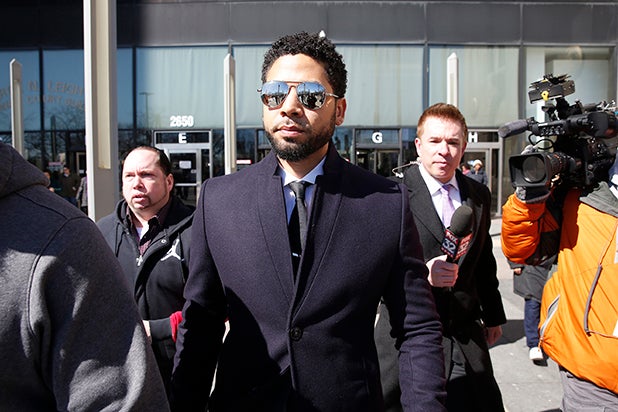 The suit names Superintendent Eddie Johnson, as well as brothers Abimbola Osundairo and Olabinjo Osundairo, stating that “as a proximate result of the wrongful conduct engaged in by Counterclaim-Defendants, Mr. Smollett has suffered and continues to suffer substantial economic damages as well as reputational harm, humiliation, mental anguish and extreme emotional distress in an amount according to proof at trial.”

The document states that “The City Counterclaim-Defendants knew or should have known that no probable cause existed to prosecute Mr. Smollett, based [sic] the facts known at the time. Under the circumstances, it was obvious that prosecuting Mr. Smollett without probable cause would result in the violation of his constitutional and legal rights.”

Also Read: Here's Where Jussie Smollett's 'Empire' Character Will Be at the Start of Season 6

Smollett’s counterclaim, which was obtained by TheWrap, was included at the end of a 49-page answer to Chicago’s lawsuit against the “Empire” actor, which was filed in an attempt to recover $130,106 for the investigation the city conducted due to Smollett’s alleged false claim that he had been the victim of a racist and homophobic attack in January.

Chicago prosecutors charged Smollett with multiple counts of filing a false police report, though all 16 of those charges were later dropped as part of a deal requiring him to perform community service and forfeit $10,000 bond

Smollett’s counterclaim says Chicago cannot recover this money from the actor, as the city initially accepted that $10,000 from him “as payment in full in connection with the dismissal of the charges against him.”

According to the counterclaim, Smollett’s attorneys say that Chicago police wanted him prosecuted based on the Osundairo brothers’ “false, self-serving, and unreliable statements in order to close the investigation into the attack on Mr. Smollett.”

The counterclaim states that Smollett is seeking that Chicago be denied its request relief, that Smollett is awarded compensatory and punitive damages, in an amount to be determined at trial, and “for all other relief the Court deems just and proper.”

Along with the city itself, Johnson and the Osundairo brothers — who were initially named “persons of interest” in the case — Smollett’s counterclaim was also filed against Chicago Police Department Detectives Michael Theis and Edward Wodnicki, and two unnamed individuals.

In response to Smollett’s counterclaim, the Osundairo brothers’ attorney provided this statement to TheWrap: “This is just another sad attempt by Jussie Smollett to try and falsely smear the Osundario brothers, the City of Chicago and the Chicago Police Department. There is no legal merit to his claims, and could be sanctionable. The Chicago brothers were open and honest with the Chicago Police Department, testified under oath in front of a Grand Jury, and stand ready to do so again, in open court, if and when called upon to do so.”

Smollett’s counterclaim was filed just under a month after U.S. District Judge Virginia Kendall ruled that Chicago could proceed with its lawsuit against the actor, stating “the city must prove the truth of these allegations to prevail at summary judgment or trial, at which point Smollett will be free to dispute the city’s claims.”

Smollett has not appeared on “Empire” after he was written out of the final few episodes of Season 5 last spring. When the show was renewed for Season 6, the option was extended for Smollett to reprise his role as Jamal, but Fox, the show’s network, said there were “no plans” for him to return at that time.

Following the May announcement that Season 6, which is now currently airing, would be the show’s last, co-creator Lee Daniels said Smollett would not return, and Fox has since backed his statement.