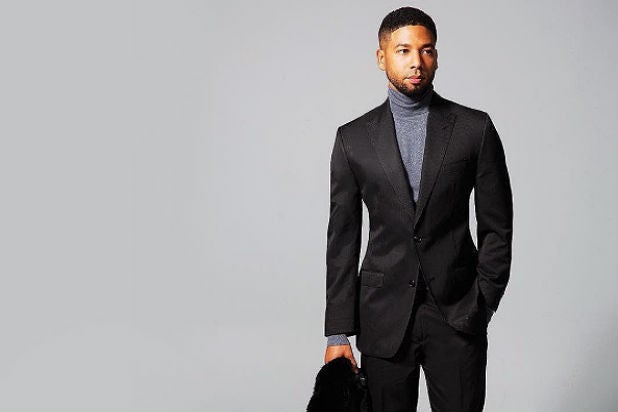 Jussie Smollett’s acting and singing talents were recognized onscreen during the first smash season of Fox’s hip-hop drama “Empire,” and now the actor’s taste in fashion is being honored.

The campaign, debuting later in Septemer, features young influencers living out their dreams in their professional endeavors and features the “Empire” star’s model good looks, along with “Brotherly Love” actor Quincy Brown, who is Diddy’s stepson.

Smollett’s dapper wardrobe choices have also been praised by fashion bible InStyle, which crowned him the “Man of Style” in its September issue, traditionally the most important month of the year for glossy magazines.

“Thank you @InStyleMagazine for naming me #SeptemberManOfStyle,” Smollett wrote on his Instagram earlier this week.

The 32-year-old actor posted a collage of photos from the dashing shoot (below), showing him smoldering in knitted sweaters and wrapped up in a trench coat.

Meanwhile, the “Dream Big” campaign will first appear in the September issue of Gentleman’s Quarterly magazine hitting stands in late August. It is driven by a national advertising campaign that will feature images across Sean John’s in-store shops at Macy’s, social media channels, broadcast and outdoor billboards.

“Sean Combs lives by the words, DREAM IT, WAKE UP, DO IT. When he created the Sean John line, it was with this mission in mind. This is a brand for those who not only dream but dream far beyond their limitations,” Jeff Tweedy, President of Sean John, said in a statement Thursday announcing the campaign. “Our fall campaign concept truly celebrates those young men who bring their dreams to fruition. Jussie and Quincy are quintessential examples of the Sean John man and are true role models for our Dream Big concept.”

“As a brand, we look to the future of fashion. The Dream Big concept best communicates our brand positioning by examining those who, like Mr. Combs, had a dream and made it a reality,” Dean Arcuri, VP Marketing & Creative Services, added. “We are excited to partner with GQ in presenting our latest Dream Big campaign. The Sean John man much like the GQ reader strives for nothing but the best and these men in our campaign exemplify that ideal.”

Smollett, who plays Jamal Lyon on Fox’s blockbuster soap, is also an accomplished singer-songwriter and wrote the tracks “I Wanna Love You” and “All of the Above” as well as co-wrote the hit “You’re So Beautiful” on the Original Soundtrack from Season 1.

Meanwhile, Fox and Saks Fifth Avenue have teamed up to bring clothing worn on broadcast TV’s top drama to stores and online, timed to the Season 2 premiere in September. The collections will include fine jewelry from Alexis Bittar, women’s ready-to-wear from Cushnie et Ochs, men’s and women’s footwear from Jimmy Choo and handbags and accessories from MCM.

Additionally, “Empire”-curated windows will be on display at Saks Fifth Avenue’s New York and Beverly Hills flagships from Sep. 10 through Oct. 7.