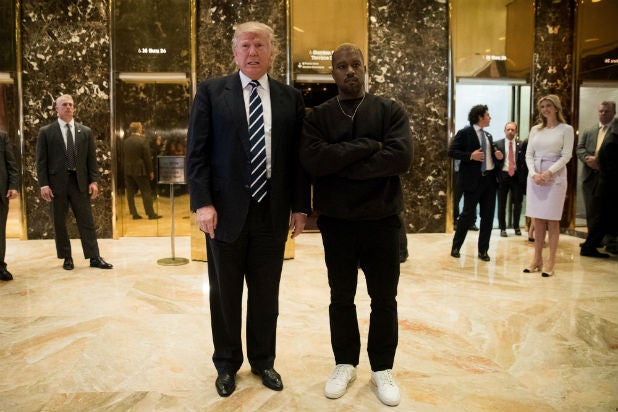 Kanye West and Donald Trump had a mysterious meeting at the Trump Tower in New York City on Tuesday morning, and the Internet went wild with speculation as to what the meeting could’ve been about.

“You take care of yourself, I’ll see you soon,” Trump was heard telling West in front of reporters and photographers at Trump Tower on Tuesday. TMZ reported West requested a 15-minute meeting with Trump but the media is busy scrambling to figure out why.

“We’ve been friends for a long time,” Trump said. “We discussed life.”

But what does that mean exactly? West’s and Trump’s reps have not yet responded to TheWrap’s request for comment.

Meanwhile, people are busy on social media speculating about what exactly went down in that discussion. From a possible play to distract the media from bad news to discussing the rapper’s presidential ambitions, here are six theories on why West was in Trump Tower today.

Vox had a similar sentiment, claiming that the president-elect wanted to distract people from his many “conflicts of interest,” including “his many projects in at least 17 other countries, to the vast amount of money he owes Deutsche Bank, to the labor and regulatory issues affecting his operations in the US, and beyond.”

I WONDER WHAT DONALD TRUMP IS TRYING TO DISTRACT US FROM BY INVITING KANYE WEST TO TRUMP TOWER.

According to the New York Daily News, there has been a lot of speculation in recent days about whether Kanye West would perform at Trump’s inauguration. When West and Trump met, people were quick to think that the meeting took place because of exactly that.

kanye west to perform famous at donald trump's inauguration, also in the works: keeping up with the trumps, a white house crossover special

Is Kanye West meeting with Donald Trump at Trump Tower to discuss performing at his inauguration? ???? #Wondering pic.twitter.com/3mQw5ch7yv

Since West’s breakdown and subsequent check in to a hospital, there have been reports that West’s wife, Kim Kardashian, wanted a divorce. People were quick to jab at that when the Trump/West meeting took place.

Kanye West visits Trump Tower to get divorce advice from an experienced professional at it, #PEOTUS @realDonaldTrump. #MAGA

4. West and Trump Are Making Movies Together

Alec Baldwin has already dressed up as Trump numerous times on “Saturday Night Live,” much to the dismay of the president-elect. But after Trump’s meeting with Kanye, one Twitter user proposed a “new buddy comedy coming to CBS this winter” starring Baldwin as Trump and Lamar Odom as West.

Another Twitter user suggested that the meeting was to discuss a “reboot of 1983 comedy classic, ‘Trading Places,'” which starred Eddie Murphy and Dan Aykroyd and was about a snobbish investor and a con artist who find their positions reversed by a bet of two millionaires.

5. Trump Is Giving Kanye a Job

A spot on the Supreme Court? A Cabinet position? Some Twitter users thought that the meeting was a job interview for West.

Wonder what job #Trump has in store for Kanye West? https://t.co/63CkriSXT1

Kanye West and Donald Trump met today and Trump Towers what cabinet post could he be up for?#KanyeWest #donaldtrump

At the MTV Video Music Awards in August, West declared that he would be running for presidency in 2020.

“As you probably could have guessed by this moment, in 2020 I have decided to run for president,” West told the stunned audience as he accepted the Michael Jackson Video Vanguard Award.

Some Twitter users saw the Trump/West meeting as a way for the latter to prepare for his presidential run.

Kanye west arrivin at the trump tower to see trump..kanye is probably tryin to shadow him so that hes ready for 2020 ????

Donald Trump & Kanye West is this an outlook into the wild 2020 Election?