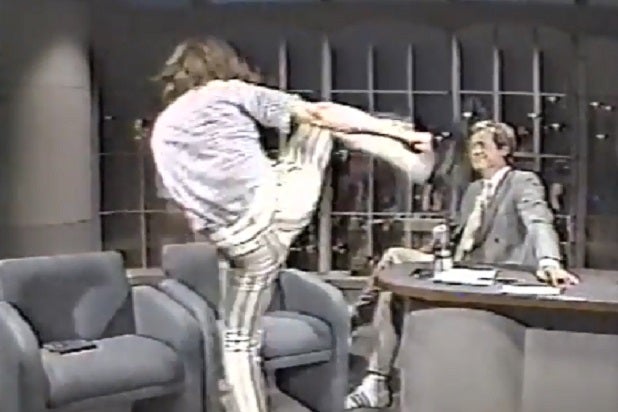 Yes, Kanye West’s appearance on “Jimmy Kimmel Live” Wednesday night — following West’s Twitter tirade at the late-night host — was everything people hoped and feared it would be. It was awkward. It was rambling. It was confrontational.

But it was far from the first time that a celebrity has delivered a cringe-worthy appearance on a late-night show.

In honor of Kanye and Kimmel’s uncomfortable face-to-face, TheWrap offers a few choice gems from the annals of awkward television interviews.

Crispin Glover on Letterman
Perhaps the grand-daddy of awkward late-night interviews. Crispin Glover appeared on Letterman’s show ostensibly to promote his film “River’s Edge,” but instead showed up in character from one of his other movies, “Rubin & Ed.” Sporting long hair, striped pants, glasses and a halting, harried speech pattern guaranteed to induce cringes, Glover delivered a bit of befuddling performance art that was punctuated with a violent flourish, as Glover threw a kick in the direction of Letterman’s head.

Bruce Jenner on ‘Late Night With Jimmy Fallon‘
A relatively recent entry in the canon. “Keeping Up With the Kardashians” personality Bruce Jenner dropped in on Jimmy Fallon in June — and proceeded to tear into Fallon for his jokes about the former Olympian’s plastic surgery. Jenner dominated the segment — and Fallon — in a skewer-fest that deserved its own Wheaties box.

Farrah Fawcett on Letterman
Letterman seems to have suffered a disproportionate share of puzzling interviews. Yet another one befell him when former “Charlie’s Angels” star Farrah Fawcett hit up the show to promote her new Playboy pictorial. Fawcett’s loopy demeanor and disjointed conversational skills had many viewers wondering if Fawcett had hit the bong before hitting the “Late Show” stage.

Sacha Baron Cohen Laps It Up With Conan O’Brien
“Borat” mastermind Sacha Baron Cohen is an expert at staging bewildering interviews in the name of promoting his latest film. When it came time to shill his “Borat” follow-up “Bruno,” Baron Cohen showed up in character on “The Tonight Show” and did it up right — or, depending on one’s opinion, oh-so wrong — by showing off his dance skills and putting host Conan O’Brien‘s sizable noggin in a crotch-thrusting leg-lock.

Jimmy Kimmel Slams Jay Leno … on Jay Leno’s Own Show
This next one has the rare distinction of featuring a late-night host suffering an awkward moment at the hands of another late-night host. Following Conan O’Brien’s clumsy “Tonight Show” ouster, fellow TV host Jimmy Kimmel eviscerated Leno over the snafu, telling Leno, “I think the best prank I ever pulled was, I told a guy that, ‘Five years from now, I’m going to give you my show.’ And then when the five years came, I gave it to him, and then I took it back almost instantly. It was hilarious.” Yes, it was — and it only got better from there.