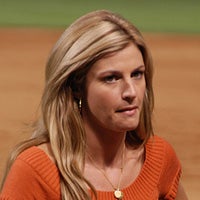 ABC has revealed 10 of the 11 contestants for the 10th season of "Dancing With The Stars," and the lineup is a doozy.

ESPN sideline reporter Erin Andrews (pictured), the victim in a bizarre "Peeping Tom" case last summer, will be among the dancing stars for ABC next season.

The network also announced that its“The Bachelor” star Jake Pavelka will join the cast as the 11th contestant.

Exclusive: Shannen Doherty on Next ‘Dancing With the Stars’