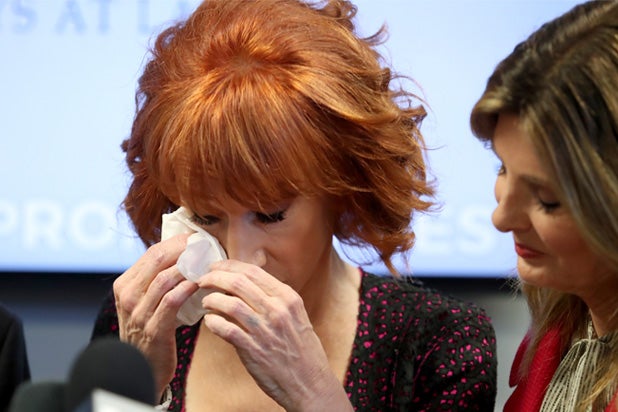 Kathy Griffin is still feeling the aftershock of her photo holding the decapitated head of President Donald Trump.

More than a month after the photo made headlines, the comedian is still under investigation, according to politics journalist Yashar Ali, whose columns have appeared in The Huffington Post, Jezebel and The Good Men Project. (Ali also served as co-chair of the Hillary Clinton presidential campaign.)

“Kathy Griffin has been interviewed by the Secret Service, in-person, for over an hour,” Ali tweeted on Monday, adding that the investigation is “still not closed.”

News: Kathy Griffin has been interviewed by the Secret Service, in-person, for over an hour….investigation still not closed.

It’s unclear when the reported Secret Service interrogation took place or what she was asked.

Griffin’s team did not immediately respond to TheWrap’s request for confirmation. A media inquiry to the Secret Service also went unanswered.

In June, Griffin’s lawyers confirmed that the comedian was under investigation. And Griffin herself has said that she was under federal investigation in a recent tweet.

Griffin came under fire from both sides of the aisle after she released a photo showing her holding the severed head of President Trump last month. Following the backlash, Griffin lost several high-profile jobs, including her New Year’s Eve hosting gig with CNN. Several venues announced they were cancelling her show at the time.

Griffin apologized for the photoshoot. But then, in what many at the time considered an-ill conceived move, Griffin held a press conference where she accused Trump of ruining her life, while vowing to continue to mock Trump in the future.

“You know what, I’m going to make fun of him more now,” she said at the time.