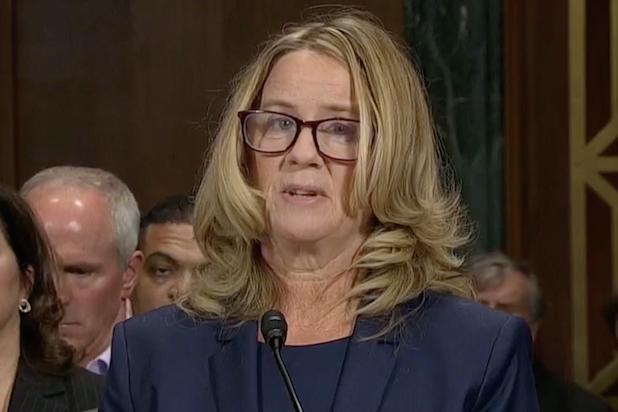 Dr. Christine Blasey Ford gave emotional testimony to the Senate Judiciary Committee in Washington, D.C., on Thursday, recalling the time when she believes Judge Brett Kavanaugh tried to rape her while he was drunk at a party during the early 1980s.

“Brett groped me and tried to take off my clothes. He had a hard time because he was so drunk,” Ford told senators in her opening statement. “I believed he was going to rape me. I tried to yell for help. When I did, Brett put his hand over my mouth to stop me from screaming. This was what terrified me the most,” she said.

As she recounted the most specific details, Ford became visibly emotional and choked up on several occasions.

“It was hard for me to breathe,” she continued, saying that Kavanaugh’s friend Mark Judge was also in the room egging him on. “I thought that Brett was accidentally going to kill me. Both Brett and Mark were drunkenly laughing during the attack,” Ford said.

Kavanaugh has categorically denied Ford’s allegation. Judge has also disputed Ford’s account, though the Judiciary Committee has so far declined to call him to testify under oath — as Ford has requested.

Ford is one of three women who have accused Kavanaugh of sexual misconduct. Another women, Deborah Ramirez, told The New Yorker on Sunday that Kavanaugh thrust his penis in her face against her will while they were both drunk during their freshman year at Yale.

A third woman, Julie Swetnick, came forward Wednesday with a sworn statement saying Kavanaugh and Judge participated in drugging and gang rape during multiple parties from around the same time period.

Swetnick told “The Circus” host John Heilemann that she came forward because she felt Kavanaugh’s past behavior should be disqualifying.