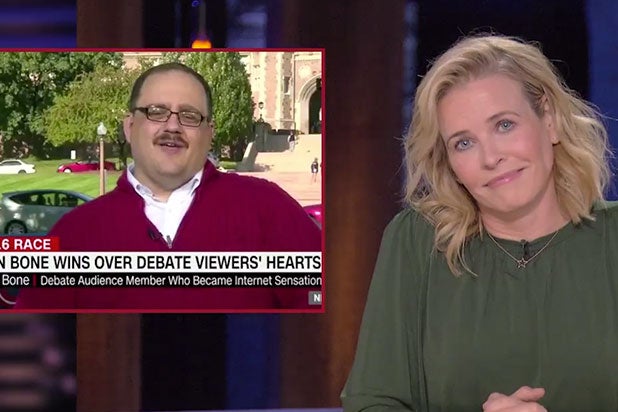 Bone, who is a 34-year-old coal-plant operator from Illinois, according to the New York Times, became a viral sensation after he asked the candidates a question about energy policy at the town hall debate on Sunday.

While he asked a reasonable question about retaining energy jobs in the U.S. while upholding environmental standards, viewers online immediately seized on Bone’s appearance and pun-worthy name, with memes popping up almost immediately.

“Mr. Bone, you may be undecided in this election but I know what I want,” added Handler. “I can already hear the little pitter-patter of little boners running around our Bel Air mansion.”

While sharing a sneak peek of their future together captioned with “Chelsea + Ken 4ever,” she added, “if you are looking for another pair of pants to split, you can start with mine,” referencing Bone’s explanation of wearing his red sweater because he split his suit pants on the way to the debate.

And yes, Handler plans to take his name, so she’ll be known as Chelsea Bone-Handler.”