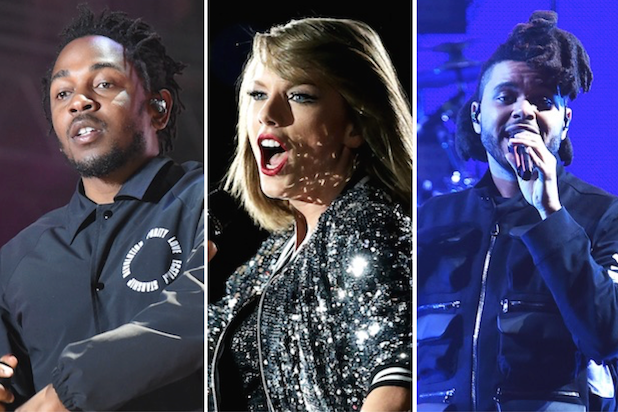 Taylor Swift and The Weeknd were next with seven nominations each.

The Album of the Year category includes Lamar’s “To Pimp a Butterfly,” Swift’s “1989,” The Weeknd’s “Beauty Behind the Madness,” Alabama Shakes’ “Sound & Color” and the biggest surprise of the category, country singer Chris Stapleton’s “Traveller.”

Record of the Year nominees include The Weeknd’s “Can’t Feel My Face,” Swift’s “Blank Space,” Mark Ronson’s “Uptown Funk,” featuring Bruno Mars, and Ed Sheeran’s “Thinking Out Loud.” D’Angelo also landed an unexpected nomination in the category with “Really Love,” a song from “Black Messiah,” his first release in 14 years.

While Swift was the only artist to place works under her name on the Album, Record and Song of the year categories, Sheeran is represented on the Record and Song lists, and also earned an Album of the Year nomination as a featured artist on The Weeknd’s nominated album.

The late comedienne's legacy lives on. She was posthumously awarded the Grammy for Best Spoken Word Album for “Diary of a Mad Diva” in a ceremony prior to Sunday's show. The album is the audio version of the late comedienne’s 12th book.