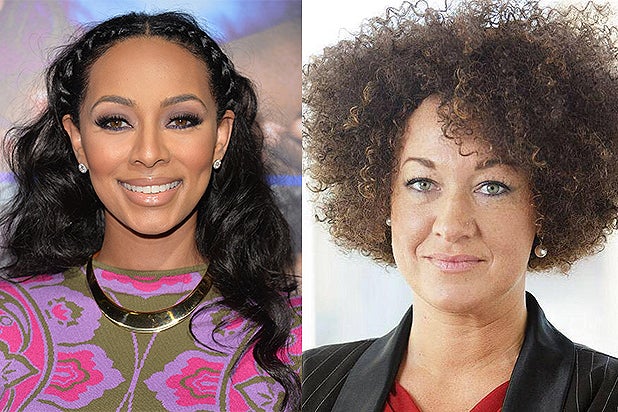 Dolezal is the Spokane, Washington chapter president of the NAACP thrust into the spotlight this week when her parents went on TV to accuse her of misrepresenting her ethnicity as black when in fact both her mother and father are listed as caucasian on her birth certificate.

“Let’s just all thank #RachelDolezal. Identity, pathological, & parental issues aside, she’s doing more than most of us do for ourselves,” Hilson wrote on Friday.

“I’m not sayin she doesn’t have serious ISSUES, I’m just sayin don’t knock her intentions or discredit her efforts. @NAACP stands by her work,” she continued.

Meanwhile, the NAACP continues to stand by Dolezal.

“We represent all civil rights issues, regardless of a person’s ethnicity. And the quality of the work that she has done to elevate the issues of civil rights in that region is what we applaud,” regional President Gerald Hankerson said in a statement.

“It’s unfortunate that this has become a trending conversation when there’s a lot more important things that are going on in America that we should be better addressing.”

Hilson is known for singles like “Turnin Me On” featuring Lil Wayne, “Pretty Girl Rock” and, now, this top-charting social media mess. Give us your thoughts on Rachel Dolezal in the comments section below.

Here are some of Hilson’s Tweets defending Dolezal:

Let's just all thank #RachelDolezal. Identity, pathological, & parental issues aside, she's doing more than most of us do for ourselves.

It is really weird tho. She took it pretty far with slave whips & what not. Levels. Deep. #RachaelDolezal

I'm not sayin she doesn't have serious ISSUES, I'm just sayin don't knock her intentions or discredit her efforts. @NAACP stands by her work

Just my personal opinion. You don't need to agree. Or thank her. Lol.

But Twitter begged to differ. Users immediately lashed out at Hilson for seemingly offering praise to Dolezal, despite her perpetrating what many would say is fraud.

Someone should write a comic book about Keri Hilson being an anti-hero that strives to fail. Like the Batman of wrong.

@howzer23 @miszmoxxxey black celebs do this all the time. Blame us for our shortcomings while heaping praise on a questionable white person

@KeriHilson how can you 'thank' someone for imitating you?

@KeriHilson NAACP stands by a lot of bullshit, you idiot.

@KeriHilson and she was also disrespectful of your ppl in lying to get position. Do the ends justify the means? In this case not likely.

@KerylsCourt @KeriHilson WTF does a WHITE WOMAN KNOW ABOUT BLACK STRUGGLE..ANYMORE than a Black person knows the name of the beachboys.lol

Hilson acknowledged the ruffled feathers on Saturday, saying, “Hey, she got outta bed every morning & did excellent work for the advancement/equality of MY ppl. THAT affects me. Let God handle the rest!”

Hey, she got outta bed every morning & did excellent work for the advancement/equality of MY ppl. THAT affects me. Let God handle the rest!