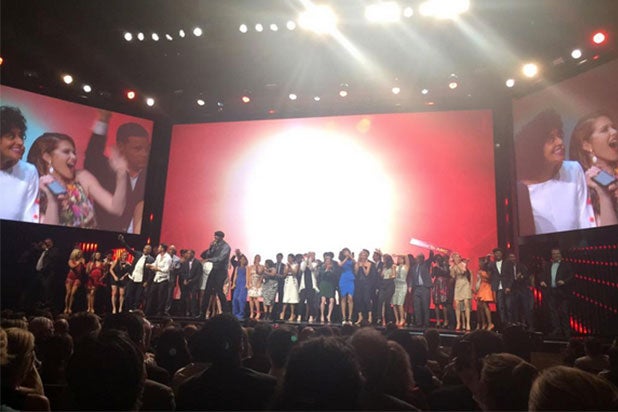 The stars of “How To Get Away With Murder,” “Grey’s Anatomy” and “Scandal” all danced on stage to Montell Jordan’s “This is How We Do It” at Tuesday’s ABC Upfront Event in New York City.

Jesse Williams from “Grey’s Anatomy” was among those who uploaded videos onto social media showing Ellen Pompeo, Billy Brown, Jessica Capshaw, Katie Lowes and others grinding and grooving in front of the audience at the Avery Fisher Hall, Lincoln Center.

They didn’t just blast the song from the speakers of the hall — they actually had Montell Jordan perform his 1995 hit, with the cast of some of the highest-rated shows on television standing right behind him.

Others took to Twitter to post snapshots of the show, which included Kerry Washington‘s and “Grey’s” star Sarah Drew’s expressions as the performance continued.

Also Read: Let's Be Upfront About The Upfronts - Clock is Ticking on 30-Second Spots

Montez Williams closes the show with “This is how your do it.” #ABCUpfront pic.twitter.com/xFioNgRfdC

Rhimes’ “Grey’s Anatomy” just faced a rollercoaster of ratings, as the show’s writers killed off one of the most beloved characters, Derek Shepherd (played by Patrick Dempsey) last month.

On Tuesday, ABC released trailers for their new shows, “The Muppets,” “The Catch” and “Dr. Ken.”