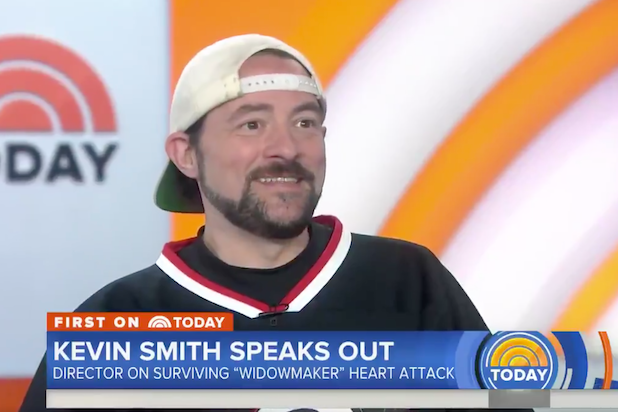 Kevin Smith is feeling great and looking good since suffering a heart attack last February, so much so that he put on his best baseball cap, hockey jersey and got baked for his first on-camera interview since then with “Today” on Monday morning.

“I’m a wake-and-baker, so I’m feeling fantastic,” Smith told Savannah Guthrie and Craig Melvin. “I’ve been up since 5 a.m, I’m ready to embrace the day.”

In fact, the “Clerks” director explained that he was even stoned when he went into the hospital and learned he had suffered a heart attack.

Smith tweeted back in February from his hospital bed that he had 100 percent blockage in his LAD artery, or the “widow-maker.” He told “Today” that his worst fears were dying and having someone see him naked, both of which go up when you’re in the hospital. He was even kept awake on the operating table, and he said the doctor later described him as “very chatty,” even lightening the mood by singing the theme song from “Degrassi.”

But Smith has since lost 32 pounds of a prescribed 50 since his health scare, and he’s now on a “plant-based” diet to go along with his pot smoking.

“This is the weight I was when I met my wife, so this is a good weight to be at. Last time I was at this weight, I scored, big time,” he joked. “I joined Weight Watchers, and they made me an ambassador. It’s me, Oprah and DJ Khaled. I’m in pretty good company.”

Smith’s show from the night of his heart attack will be made into a stand-up special on Showtime called “Kevin Smith: Silent But Deadly” airing on May 11.

Watch the full interview from “TODAY” below: