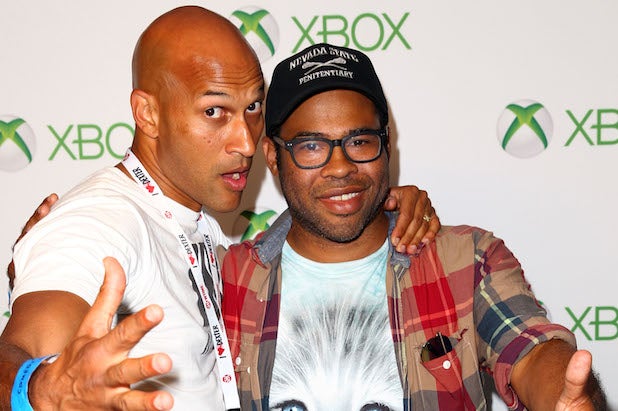 Having established themselves as a formidable comedy brand with their hit sketch series “Key & Peele,” Keegan Michael Key and Jordan Peele are making a deal to produce the “Police Academy” reboot for New Line, TheWrap has learned.

Scott Zabielski (“Tosh.0”) is no longer attached to direct the film, which Key and Peele are in talks to produce with Paul Maslansky.

While the duo have not agreed to star in the reboot yet, it’s conceivable that they could appear in front of the camera depending on the strength of the script, which is currently being rewritten by Jeremy Garelick. David Diamond and David Weissman wrote the previous draft.

New Line released seven films in the “Police Academy” franchise between 1984 and 1994, and the series helped launch the careers of several stars including Steve Guttenberg and Kim Cattrall. The franchise spawned a short-lived animated series and a live-action series that ran for 26 episodes back in 1997.

It’s possible that actors from the original “Police Academy” movies could reprise their roles in the reboot via fun cameos.

Key and Peele started out on “MADtv” before they landed their own series, which has had several sketches go viral. The duo are also developing an untitled comedy with Judd Apatow for Universal.

Key will soon be seen in Luke Greenfield’s Fox comedy “Let’s Be Cops,” which stars Jake Johnson and Damon Wayans Jr. as civilians who get in over their heads when they pretend to be real police officers. He and Peele also play FBI agents on FX’s upcoming series “Fargo.” The duo are repped by UTA and Principato-Young Entertainment.