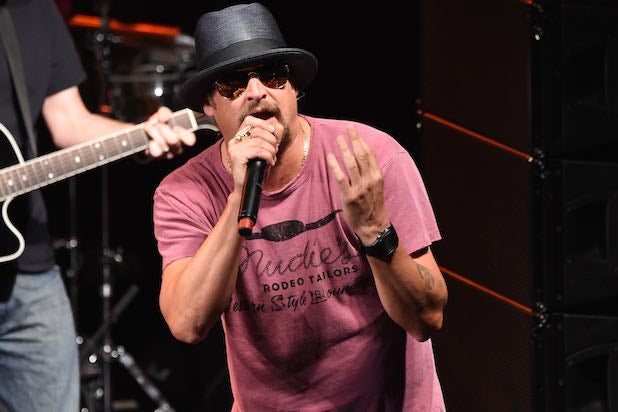 Kid Rock has a way with words that probably won’t please protestors demanding that the Confederate flag be removed from his shows.

“Please tell the people who are protesting to kiss my ass,” the rock star said in a statement to Fox News.

His blunt reaction to the controversy comes after the Detroit chapter of Al Sharpton’s National Action Network met at the Detroit Historical Museum to protest Rock’s decision to display the flag on stage during his concerts.

Rev. Charles Williams II, the president of the group’s Michigan chapter, called Kid Rock “the home-town hero who is a zero with the Confederate flag.”

Sam Riddle, the group’s political director, asked, “How in the hell can Kid Rock represent Detroit and wave that flag just generating millions and millions in ticket sales – a flag that represents genocide to most of Detroit?”

Protestors are threatening to boycott the museum where the singer known for hits like “American Bad Ass” and “Cowboy” is featured in an exhibit honoring a century of music in Detroit.

While discussing the protest on Fox News’ “The Kelly File,” a guest argued the musician “has done a lot to help Detroit, probably more so than the Michigan chapter of the National Action Network.”

Host Megyn Kelly also defended the Detroit native from protestors who may think he is “some sort of a racist.”

“By the way, I’d like to introduce you to Bobby Jr., Kid Rock‘s African-American son,” Kelly said. “I wonder if Bobby Jr. knows that his dad is a racist.”

Also read: Film Critic Calls for Banishment of 'Gone With the Wind' Over 'Insidious' Racism

On Friday, crowds cheered as the Confederate flag was removed from the South Carolina Capitol. The fight to remove what many consider to be a symbol of slavery was re-ignited earlier this year after a racially motivated shooting inside a Charleston church, where nine members of the congregation were murdered.