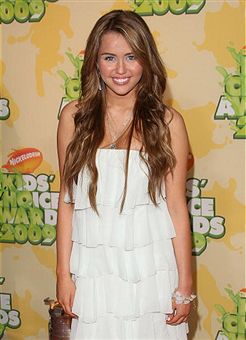 If Miley Cyrus is really serious about this acting thing, she’s apparently got a good start with the kids.

In a more predictable outcome Saturday night, Taylor Lautner picked up two orange blimps, one for favorite movie actor (a loose interpretation of “acting” being the developing theme here) and for his character, the “Twilight” werewolf Jacob, as half of “cutest couple” (alongside Kristen Stewart’s Bella).

The 23rd annual Nickelodeon show, held inside UCLA’s Pauley Pavilion, was filled with the traditional green-slime fountains that doused the unsuspecting and suspecting alike (Katy Perry got gooed and tried to give Cyrus a slimy hug, but the “Hannah Montana” actress managed to escape).

Justin Bieber sang his hit “Baby” just slightly under perfect pitch, but the pint-sized Canadian pop superstar with the helmet hair brought an unholy shriek from the crowd all the same.

The 115 million online voters who chose the show’s winners picked the Black Eyed Peas for favorite music group; Jay-Z for male singer and Taylor Swift for female singer and song ("You Belong With Me.")