Kim Cattrall was in one of the year’s critical hits, Roman Polanski’s “The Ghost Writer,” and she’ll soon appear onscreen in one of the summer’s presumed blockbusters, “Sex and the City 2.” In between, though, Cattrall is going low-budget and indie with “Meet Monica Velour,” director Keith Bearden’s offbeat comedy about an ‘80s adult-film star who’s fallen on hard times, and the besotted young fan (Dustin Ingram) who becomes her unlikely defender.

While “Meet Monica Velour” screens several times at Tribeca (schedule here), Cattrall is appearing on the London stage in a new production of Noel Coward’s “Private Lives.” She spoke to theWrap after an evening performance this week. 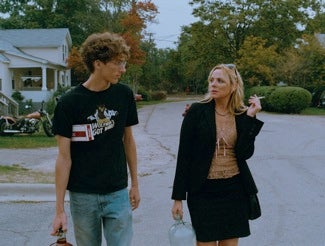 For a woman who’s spent most of your career looking pretty glamorous, “Meet Monica Velour” is something of a shock.
Yeah. When I met Keith, he immediately said, “I want you to gain 35 pounds.” And I said, “I can’t gain 35 pounds. It’s too much. But I can gain 15 pounds, and I won’t exercise."  Women of my generation, we were brought up with Jane Fonda workout tapes in our hands. But for three months I ate, I didn’t exercise, I had a fabulous time, I gained the weight.

And we just literally went off and spent three weeks in Detroit making the movie on a very small budget. There were no heads of departments, everybody was pitching in. It felt like the old days of the ‘70s and the early ‘80s, when I was doing a lot of independent movies.

Did you ever look in the mirror and say to yourself, do I really want to be seen like this?
There were moments when I would think, Oh, f—, man.  All my life I’ve been thought of as an attractive woman, and now to be filmed like this, sometimes without any makeup at all … But there’s a beautiful scene in “Notes on a Scandal,” where you see Judi Dench in a bathtub. It’s an image that is so true and honest that it takes your breath away. I thought yes, this is the truth. This is what this character looks like, and I don’t think there’s any place for me and my ego in this movie. If I do this, I’m not going to ask for key lights, I’m not going to ask to cover a blemish, I’m just going to let it hang.

(laughs) I remember while we were filming, Obama had come to Detroit and was doing a big speech. And I got to meet him, which was a big thrill. And, of course, I’m 15 pounds overweight, looking like Monica Velour.

He said, “What are you doing in Detroit?” I said, “I’m doing this movie,” and he said, “What’s the movie about?” and I said, “It’s about an older woman and a younger man.” And he charmingly looked at me and said, “Who plays the older woman?” And I thought oh, this guy’s got my vote.

Do you ever find yourself burdened, as Monica Velour is in a completely different way, by the public or industry expectations thrown on you as a sex symbol of sorts?
You know, I can’t control what people project on me. And I think the great thing about getting older is that you don’t give a s— as much. I hope people like this movie, but I know why I did it.

And why was that?
I did it because it scared me a bit. It scared me to play a character who is so hopeless, because most of the characters I play are very strong, independent women who are about changing their situations. And here was a woman who was trying to change her situation, but she’s a washed up sex worker, and nobody gives a s— about you. You’re garbage. Nobody cares, except maybe some bikers who want to f— you. It’s disheartening, but it is a portrait of people who exist, and a world that exists. It’s not pretty, it’s not sexy, no magazine wants to photograph it, but it’s very real, and heartbreaking.

Between “The Ghost Writer,” the play in London, “Meet Monica Velour” and “Sex and the City 2,” you’re having quite a diverse year. Did you plan it that way, or is it an accident of timing?
I didn’t plan it. I did “Monica Velour” about a year and a half ago, and then I did the Polanski film last year. And I’d blocked off January through May to do another play, an Ibsen play called “Ghosts” with [director] Richard Eyre. But there was a rights issue, so they changed the play. Instead of “Ghosts,” which is a very heavy, dramatic, difficult play, we ended up doing “Private Lives,” which is such a tremendous joy. And now we’re making plans to bring it to Broadway. So with all that, and “Sex and the City,” which was so much fun to make, it’s been a great year.