You’ve been exposed, Piers Morgan — in more ways than one.

Media personality Morgan once again went on the attack against Kim Kardashian on Friday, taking her to task for posting yet another nude photo of herself.

“Just put it/them away, luv,” Morgan wrote, in response to a photo Kardashian posted Friday, ostensibly to show off her new spray tan. “@KimKardashian – seriously. Getting a bit desperate now.”

It’s not the first time Morgan has torn into Kardashian for posing in the buff. In March, the “Keeping Up With the Kardashians” star published a photo of herself posing topless and flipping the bird with her pal Emily Ratajkowski.

Morgan was relentless in his criticism of Kardashian’s and Ratajkowski’s photos, tweeting, “Just a thought @KimKardashian @emrata – but you could always try wearing a little dignity?”

For good measure, he added in a later post, “RIP feminism” and added that he felt the display was “just tacky.”

“I don’t dispute their right to get their kit off & flick the bird to millions of strangers,” Morgan opined. “It’s just tacky.”

But Morgan appears to have had a much softer stance on nude photography seven years ago. 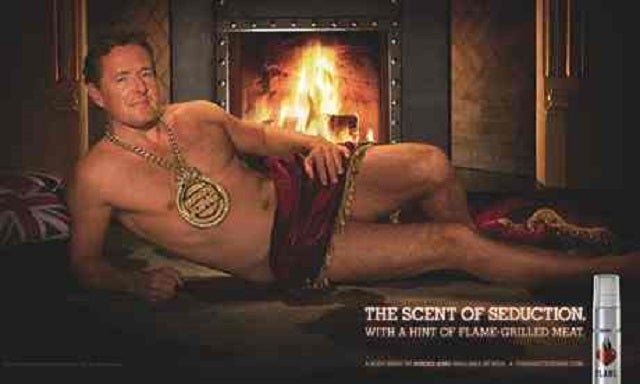 Back in 1999, Morgan didn’t appear to have a problem in stripping down and smiling for the camera.

As reported by the Guardian, Morgan doffed his duds in an advertising campaign for Burger King, lounging in front of a roaring fire for a billboard that read, “The scent of seduction. With a hint of flame-grilled meat.”

True, Morgan didn’t expose his private parts in the ad. (Then again, neither did Kardashian in the photo posted Friday, thanks to some strategic blocking.) In an effort to protect his modesty, Morgan had a cloth draped across his crotch.

Morgan was further dressed with a huge medallion featuring a big, gold hamburger. Which, we suppose, under some stretch of interpretation, doesn’t fall into the “just tacky” category at all.

But hey, at least Morgan stripped down for the noble cause of promoting a fast-food chain.

And in case anyone was wondering — yes, that was Morgan in all his glory: Morgan insisted during an Access Hollywood interview that the body in the ad was, indeed, his.

“I’ve been showing off this physique on Malibu Beach for years and no one’s ever fully caught it. This is it. This is the real me,” Morgan affirmed.

So what’s the naked truth here? Is Piers talking out both sides of his, uh, mouth? Share your thoughts in the comments section.