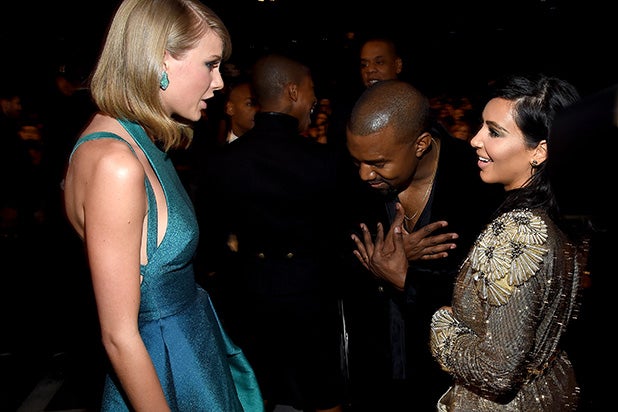 Kim Kardashian claims Taylor Swift “gave the OK” for Kanye West’s “Famous” lyrics, contrary to an explanation from Swift’s rep in February that the “Blank Space” singer warned the rapper about releasing the song.

“[She] totally gave the OK. Rick Rubin was there. So many respected people in the music business heard that [conversation] and knew,” Kardashian said in a recent interview with GQ Magazine. “I don’t know why she just, you know, flipped all of a sudden.

“It was funny,” West’s wife continued, “because [on the call with Kanye, Taylor] said, ‘When I get on the Grammy red carpet, all the media is going to think that I’m so against this, and I’ll just laugh and say, ‘The joke’s on you, guys. I was in on it the whole time.’ And I’m like, wait, but [in] your Grammy speech, you completely dissed my husband just to play the victim again.”

“Famous” featured the notable lyrics, “I feel like me and Taylor might still have sex / Why? Because I made that bitch famous.”

Back in February, West said that the slur was actually meant as an “endearing term,” and Swift “gave her blessings,” but the pop star’s spokesperson has said otherwise.

“Kanye did not call for approval, but to ask Taylor to release his single ‘Famous’ on her Twitter account,” Swift’s rep told Entertainment Weekly. “She declined and cautioned him about releasing a song with such a strong misogynistic message. Taylor was never made aware of the actual lyric, ‘I made that bitch famous.'”

“I did not diss Taylor Swift and I’ve never dissed her,” he tweeted, adding that he “called Taylor and had a hour long convo with her about the line and she thought it was funny and gave her blessings.”

“I’m not even gone take credit for the idea… it’s actually something Taylor came up with … She was having dinner with one of our friends who’s name I will keep out of this and she told him … I can’t be mad at Kanye because he made me famous!” West wrote.

Swift made headlines when she addressed the situation without naming the rapper during her Grammys acceptance speech for Album of the Year.

“As the first woman to win Album of the Year at the Grammys twice, I want to say to all the young women out there, there are going to be people along the way who will try to undercut your success or take credit for your accomplishments or your fame,” Swift said upon receiving her third trophy of the night. “But if you just focus on the work and you don’t let those people side track you, some day when you get where you are going, you will look around and you will know that it was you and the people who love you who put you there.”

In the GQ interview, Kardashian also said Swift sent a letter through her attorney saying, “Don’t ever let that footage come out of me saying that. Destroy it.”

While Swift’s rep didn’t immediately respond to TheWrap’s request for comment, GQ reached out to her spokesperson, who provided the following statement.

Also Read: Why Taylor Swift Got the Last Word Over Kanye West, 7 Years After 'I'mma Let You Finish'

“Taylor does not hold anything against Kim Kardashian as she recognizes the pressure Kim must be under and that she is only repeating what she has been told by Kanye West. However, that does not change the fact that much of what Kim is saying is incorrect. Kanye West and Taylor only spoke once on the phone while she was on vacation with her family in January of 2016 and they have never spoken since. Taylor has never denied that conversation took place. It was on that phone call that Kanye West also asked her to release the song on her Twitter account, which she declined to do.

“Kanye West never told Taylor he was going to use the term ‘that bitch’ in referencing her. A song cannot be approved if it was never heard. Kanye West never played the song for Taylor Swift. Taylor heard it for the first time when everyone else did and was humiliated. Kim Kardashian‘s claim that Taylor and her team were aware of being recorded is not true, and Taylor cannot understand why Kanye West, and now Kim Kardashian, will not just leave her alone.”