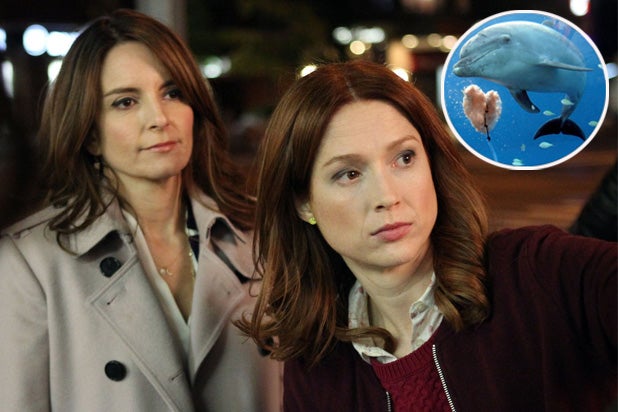 (Spoiler alert: You may not want to read this until after watching the second season of the Netflix comedy “Unbreakable Kimmy Schmidt.” Or are a big dolphin fan.)

Tina Fey seems to have it out for dolphins. In the ninth episode of “Unbreakable Kimmy Schmidt” season 2, Fey spouts some disturbing information about the aquatic mammals.

It begins when Fey’s therapist character Dr. Andrea tells the ever-optimistic Kimmy (Ellie Kemper) that her sleep cycle is erratic.

“You know who else doesn’t sleep a lot?” Kimmy says. “Dolphins. And they’re always smiling.”

“Dolphins are rapists,” Dr. Andrea replies. “Look it up.”

And so we did — and it turns out that the truth is just a bit more complicated than the TV shrink (and co-creator of the Netflix series) let on.

Dolphins can be aggressive in their courtship and mating, according to Justin Gregg, dolphin researcher and author of “Are Dolphins Really Smart?” They can herd their mates, mount each other (or even human swimmers) and display what researchers call “socio-sexual behavior” that does not involve an actual attempt to mate.

But it is primates, birds and insects — not dolphins — that engage in what scientists call forced copulation, Gregg wrote. “If forced copulation should be considered the non-human animal equivalent to rape insofar as it appears (to the human observer) as if the female has not given consent, then this still has never been observed in dolphins.”

Gregg concluded: “The dolphins are rapists meme easily lends itself to being a trendy t-shirt, or link-bait headline, but rape is undoubtedly the wrong term to apply to dolphin behavior. It is a loaded term that really should be used solely to describe the fundamentally horrific, and uniquely human crime of rape as defined by the law. There is no dolphin equivalent.”

So there’s really no porpoise to be served slandering the poor dolphin.